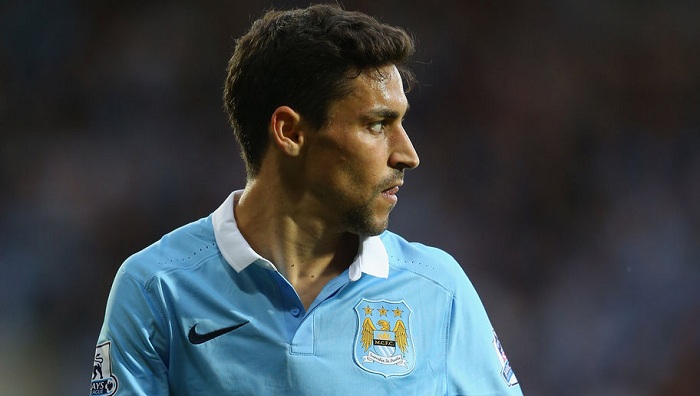 Manchester City’s new-boy Kevin de Bruyne could well come straight into the side given his impressive exploits for former side Wolfsburg in the last 18 months, and existing winger Jesus Navas might be the one fighting for his place in the side as a result. The Belgian international set the Sky Blues back £55M, and won’t be content with being on the bench for long, especially considering his competition isn’t delivering on the pitch.

Currently top of the table, Manchester City have enjoyed a bright start in the Premier League – winning all four games of the new season without conceding. Manuel Pellegrini’s men look a well-oiled machine, but they can still strengthen the side if De Bruyne comes in for Navas. The Spanish international has played in all four games in the league so far this campaign, but has failed to score or make an assist.

Lasting only 45 minutes in their last game against Watford, the 29-year-old is certainly in the firing line if the City boss looks to give De Bruyne his first start when the players are back from the international break. Navas has created opportunities for his teammates on the pitch, but doesn’t come close to a playmaker like De Bruyne.

The 24-year-old summer-signing scored and assisted 30 goals in the German Bundesliga last season, and made 99 successful dribbles, as well as creating 112 chances. It’s not hard to see why Manchester City were so keen to spend so much on bringing him to the Etihad Stadium, and he could well form a potent attacking quartet of Raheem Sterling, David Silva and Sergio Aguero.

Navas has been valiant in trying to keep his place, however, saying: “I feel I’m a really important player within the squad and my duty now is to keep working hard to keep my place in the team – then the manager will decide. I’m very focused and working really hard in training every day. This is the way I want to do things this season.”

Nevertheless, the one-dimensional winger will struggle to keep his place given how little he brings to the side apart from pace. De Bruyne is of the mould of the current City attacking-midfielders, who all like to cut inside and link up with the onrushing fullbacks. Navas tends to take the ball down the byline to get a cross into the box. And with the somewhat out-of-favour Samir Nasri not looking likely of getting much game time either, De Bruyne is a shoo-in to come straight into the side in the coming weeks.