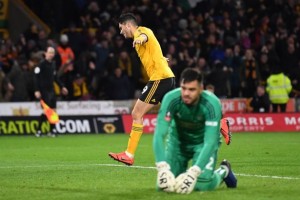 Manchester United had a really good chance to stamp a marker of being the favourites to win their first silverware in the FA Cup under Ole Gunnar Solskjaer. Though, the quarter-final fixture was not straightforward with it being a difficult one against Nuno Espirito Santo’s Wolves away from home, a side that have picked up a number of results against the Premier League’s top-six so far this season.

Overall, United started on a positive note and dominated possession for majority of the match, but failed to breakdown the opposition’s defence and did not test goalkeeper John Ruddy until the final moments of the game. Meanwhile, Wolves were defended in numbers and created the bigger chances and were ruthless on the counter, with the goals coming from Diogo Jota and Raul Jimenez.

Squad has been burned out from top to bottom

With Alexis Sanchez and Romelu Lukaku unavailable due to current injury problems, whilst the likes of Anthony Martial, Jesse Lingard and Nemanja Matic have been rushed back into the starting line-up, it is not a surprise that the team have struggled to get going following the monumental Champions League comeback against Paris Saint-Germain. The side have been lacking the quality from the bench to help them effect and turn the game around, leading to back-to-back defeats.

On top of that, Solskjaer himself has not got the ideal options available for him to use in the squad as a whole and the blame should definitely be referred back to the board and Ed Woodward. When looking at the current team and the fact that only Diogo Dalot, Fred and Lee Grant came into the club in the previous summer transfer window, it can easily be stated that the new arrivals was simply not enough to allow Jose Mourinho or Solskjaer to guide the side to a successful season.

The problems in the final third have started once again

At this moment of time, the problems in the final third have returned to what it once was in the final months of Mourinho’s time at the club, where the front three fail to provide enough creativity and movement on and off the ball. There was one stage in the match last night at Molineux Stadium, where it had seemed like Martial and Rashford were nowhere to be seen in the opposition’s half.

For sure, if Lukaku was fit and in good condition to play, the side would have played more down the flanks and would have sent constant crosses into the box for the Belgian international to pounce on. However, with his much needed presence missing, the back-three/five of Wolves were able to isolate United’s attackers and left the midfielders with no choices but to play backwards or sideways.

Since his arrival as Manchester United’s interim coach from the middle of December, this has been Ole Gunnar Solskjaer’s first game where he has tactically been dominated and outdone by the opposition. In his favour, Wolves have actually eased down in the league over the last couple of weeks and have quietly been preparing for this match through less training and more resting.

On the other hand, the signs of a goal coming were there in the early moments of the second half, with the hosts becoming more comfortable in possession and attacking with intent along whilst both Matt Doherty and Ruben Neves enjoying a lot of space and time on the ball. Had Solskjaer and Mike Phelan spotted this and looked to match up with Wolves’ setup, the game could have potentially been more balanced and the side would have had more control to the match.