This time last year the football world was still reeling from the astonishing €222 million capture of Neymar by Paris Saint-Germain.

It was a stunning coup by the French side, taking a player destined to become one of the world’s best from one of the footballing super powers that PSG aspire to be.

Barcelona were dumbstruck and, as a result of that particular deal, have been careful to ensure much higher buyout clauses for their best players. END_OF_DOCUMENT_TOKEN_TO_BE_REPLACED

2015 has continued in similar fashion as the previous year for strugglers Borussia Dortmund as the German Bundesliga outfit were defeat 1-0 at home to Augsburg on Tuesday night. The result left BVB rooted to the foot of the table after 19 games, and following the final whistle two of the Dortmund players apologised to the angry supporters. 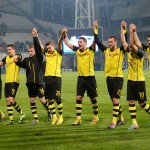 A noble gesture, yes, but the only way to appease the supporters is to win games and convince them you’re giving your all for the side. Manager Jurgen Klopp has seen his reputation shattered in the last 18 months, with Dortmund’s demise leading to speculation about his future, as well as many of the players’.

It’s worrying when a long-serving manager criticises his men for lacking the courage, but that’s exactly what Klopp said in his post-match interview. “We can be accused of anything tonight and it is all justified. Battling also means having the courage to take the right decision. We were missing that tonight.”

Many blindly assume Dortmund will be safe purely due to the strength of their squad, but there’s no guarantee they can turn things around. While only two points from safety, the table doesn’t lie. The BVB have lost the most league games this season (11), and have won the second-least (4).

Their rise to prominence is a brilliant rags-to-riches story, but the fairytale could well be over after this season. Let alone their final position in the league table, if Dortmund miss out on a Champions League place – which now looks very likely – so many players will be seeking an exit, and even the manager could call it quits too.

Arsenal are seeking out replacements for Arsene Wenger for when the Frenchman retires, and Klopp has been linked with the club for years now. As for the players, stars such as Mats Hummels and Marco Reus will be near impossible to hold on to, given the interest.

Dortmund threatened a revival this time last month, picking up two wins and a draw from four games to climb up to 13th in the table. But two points won from a possible 15 saw them right back down at the bottom again. This is a side that has won the Bundesliga title only three years ago, and a side that have finished in the top-two in each of the last four campaigns.