Sevilla bounced back well from their 1-0 home defeat to Valencia at the end of March. Since then, they have won two La Liga games in a row, with both games finishing 2-0.

Joaquin Caparros’ men are 5th in La Liga, just one point behind Getafe and a coveted spot in the top four. Three points behind Sevilla are Valencia, the team who beat them on March 31st.

Valencia followed up that win at Sevilla with an impressive 2-1 home victory against Zinedine Zidane’s Real Madrid. However, they lost 2-0 at Rayo Vallecano on Saturday in a surprise result. END_OF_DOCUMENT_TOKEN_TO_BE_REPLACED

The draw for the Copa del Rey quarter finals has thrown up an interesting conundrum for Barcelona.

The Catalans have been paired with Sevilla for the two-legged tie, the Andalusians being one of, if not the toughest opponent they could’ve faced.

It will see a quick return to the Camp Nou for Munir El Haddadi, recently signed by Pablo Machin, and how he would love to put a spoke in the aspirations of his former side. END_OF_DOCUMENT_TOKEN_TO_BE_REPLACED

If, as has been rumoured, Munir El Haddadi’s agent has demanded vast sums to ensure his client will sign a new deal at Barcelona, one can perhaps understand the club’s ire at being held to ransom.

Frankly, agents are the bane of the modern game, but for many players, they are a necessary evil when it comes to the business side of their employment. END_OF_DOCUMENT_TOKEN_TO_BE_REPLACED

Following on from some exciting performances and high scoring games in recent weeks, La Liga went through a weekend of something like the status quo without too many majorly surprising results this past weekend. Sevilla did well to record a 3-1 win at Eibar, while El Derbi Madrileño finished goalless at the Santiago Bernabeu. Valencia did manage to reward their fans for the patience shown in the early stages of this campaign by notching up their first win of the campaign, a 1-0 victory at Real Sociedad, and Athletic Bilbao did well to secure a point following their 1-1 draw against Barcelona at the Nou Camp. Utilising a 4-3-3 this week, let’s take a look at the best La Liga best XI from round 7!

END_OF_DOCUMENT_TOKEN_TO_BE_REPLACED 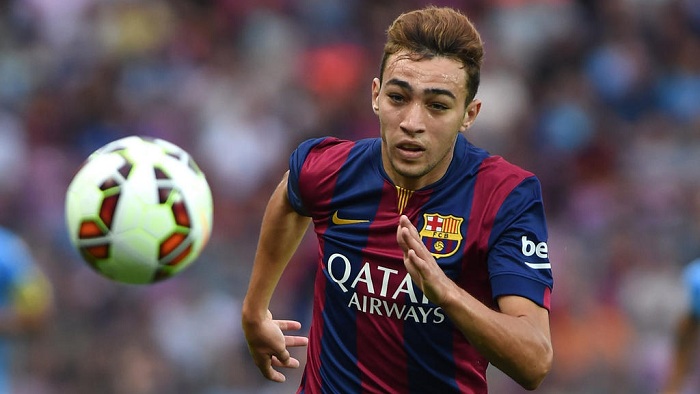 Barcelona forward Munir El Haddadi started against Getafe in the Spanish La Liga this weekend, but found himself hauled off after 61 minutes following yet another disappointing performance. The 20-year-old has been given the majority of his league appearances from the substitutes’ bench, but hasn’t been able to shine for the Catalans this season.

Against Getafe, El Haddadi failed to register a shot on target, while making just one dribble and goalscoring chance. He was guilty of relinquishing possession this weekend, and certainly didn’t impress his manager enough to warrant staying on the pitch. Luis Enrique put him out of his misery after an hour, and now the youngster will be considering future.

Failing to score from 10 games in all competitions for Barcelona, Munir El Haddadi could find himself out of the match day squad entirely if manager Luis Enrique gives up risking him in games. The Spanish international has stiff competition in the side in attack, and he won’t last long in the first-team if his barren spell continues, so he’s currently at the precipice.

Now aged 20, Munir El Haddadi cannot allow his development to go stale. If game time starts to allude him at Barcelona, he may have to seek action elsewhere in the form of a loan. The academy starlet won’t want to be playing reserve team football as he’s certainly outgrown the level of competition. Last season, he was forced to drop down into the B side, but did still make 16 appearances in total for the first-team.

Nevertheless, his future could be up sooner than expected if he can’t continue developing for Barcelona, so this is a big season for the young forward. Despite not having scored for a reported 431 days for the Catalans, Enrique is standing by the forward. “It doesn’t worry me. The minutes they’re getting is allowing them to grow, and they have been participating in our goals,” he said.

“Playing with or without pressure are very different things,” he reasoned. “It’s not the same when you play because you have to play. But I am happy with them, although they can both improve.” The Barcelona manager cannot persist with failed players in his pursuit for silverware this season, however, so Munir will have to start vindicating his selection soon.

With Lionel Messi out of action for Barcelona, Munir has the best chance to prove his worth, but he hasn’t taken his chance with both hands, and can’t seem to turn around his poor form.