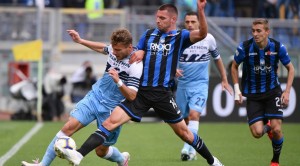 Facing their fellow finalists in the same venue just 10 days before the main event provided a rare and valuable opportunity to scout out potential strengths and weaknesses – so what lessons can Simone Inzaghi and his team learn from it?

Time up for Wallace

The Brazilian’s selection in defence was something of a surprise, particularly given the impressive recent form of Luiz Felipe. Wallace has been error-prone throughout his three-year spell in Rome, but even by his standards this was a spectacular display of incompetence.

It was the centre-back’s lazy pass out of defence that was intercepted by Papu Gomez to set up the goal that gave Atalanta the lead, and it was a towering header from Wallace into his own net that ensured the Bergamo side took the three points.

The 24-year-old’s issue is predominantly concentration and confidence. After hearing his own fans boo his every touch in the aftermath of these latest high-profile errors, he is likely to be more fragile than ever. Felipe must be reinstated.

Never let your guard down

Lazio took the lead through Marco Parolo after just three minutes and continued to threaten in a promising opening period to the game. However, a familiar trend soon emerged as Atalanta equalised midway through the first half before pulling away, aided by Wallace’s efforts, after the break.

With or without the Brazilian, though, it was the latest example of a second half decline from Lazio, which is something of a trend for the club in 2019. The Biancocelesti have won just one of their last 14 second halves – in the Rome Derby at the start of March.

This simply must be resolved in time for the cup final, as Atalanta have come from behind to win a remarkable 14 times this season already. They possess the belief and ability to not let their heads drop in times of trouble – something Inzaghi’s team could learn from.

Trust in the Corrrea-Caicedo partnership

The wait for Ciro Immobile’s flagging form to turn a corner goes on after another uninspiring 90 minutes from the Italy striker.

If Inzaghi is picking on form, then there is little doubt that the combination of Joaquin Correa and Felipe Caicedo should lead the line next week. It has been more than six months now since Immobile scored a Serie A goal in open play at the Stadio Olimpico.

Correa was left on the bench for the defeat to Atalanta and when he came on it was Caicedo who was replaced, much to the surprise of the home crowd. The Ecuadorian is in a rich vein of form, with four goals and an assist in his last four games, and Lazio have won six games from six when he has started alongside the Argentine this season.

Criticising Immobile is a difficult and uncomfortable thing for Lazio fans to do, but if Inzaghi takes an objective look at the evidence of 2019 so far, Ciro should start on the bench.

One big difference between these two fixtures will be the atmosphere. Last Sunday, torrential rain had fans scurrying up the steps to avoid being soaked, the attendance was unimpressive and the mood was low, with the Curva Nord refusing to sing in protest against high cup final ticket prices before the crowd started to boo their own player after Wallace’s errors.

The pageantry that surrounds a cup final will result in an entirely different kind of spectacle and the build-up is already well underway with celebratory murals being painted, commemorative kits being launched and mobile apps unveiled.

The latest reports say that just 1000 of Lazio’s 28,000 ticket allocation remains and with 20,000 Atalanta fans making the trip south there will be a raucous atmosphere inside the stadium to go with the usual pomp and ceremony that surrounds one of the biggest days on the Italian football calendar.

Given that all of this is happening in Lazio’s home ground, it is up to Inzaghi and his players to embrace the moment as they look to secure the first major trophy of the coach’s reign.

Listen to the veterans of 2013

The pressure the players are feeling now is nothing compared to what the squad faced six years ago before the first ever Coppa Italia final meeting between Lazio and Roma.

The Aquile’s 1-0 victory on that day, 26 May 2013, has gone down as one of the greatest in the club’s history and the man who scored the decisive goal, Senad Lulic, now captains the side.

Lulic and Stefan Radu are the only survivors of that triumphant squad. Both started in the 2013 cup final and both should again start next week, although Radu is in a race to recover from injury in time.

Their experience of that occasion could be invaluable to a squad that has often fallen short in the big games this season. They know what it takes to keep a cool head and succeed in a Coppa Italia final where the demands of the fans are even greater than they will be this time. That knowledge could be more vital now than ever.