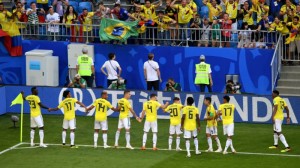 After suffering a defeat to Japan in the first fixture of Group H, a lot of people were having doubts on whether Colombia would be able to pick themselves up from the floor and turn the situation around before it is too late. Also, the experts of the beautiful game were seriously shocked at their start to the competition as many had the South American side down as their dark horses of the tournament.

However, Los Cafeteros do what they do best, and they made sure that they were not going to leave Russia and most importantly the World Cup anytime soon. Once James Rodriguez returned into the line-up for the second game against Poland, the side were in full confidence and had the ability as well as the pure mentality to go on to beating Adam Nawalka’s side like it was a piece of cake.

With the goals coming from Juan Cuadrado, Radamel Falcao and Yerry Mina, the side have shown that there a number of talented players in all positions, who can go on to contribute towards the team on both sides of the pitch. Meanwhile in midfield, both Abel Aguilar and Wilmar Barrios were dictating play and keeping the Polish attackers quiet as well as helping the team progress forward.

In the final fixture of the group stages, Colombia had to make sure they picked up the three points against Senegal whilst the other match was been Japan and Poland. Despite having a slow start to the game, the side turned it up a notch in the second half and completed an incredible smash and grab victory, where Mina’s goal in the 75th minute put the team ahead and in the driving seat.

Up next, Jose Pekerman and Colombia will go head-to-head against Gareth Southgate’s England, who will have a huge point to prove as the Three Lions have been eliminated, from the European Championship or the World Cup in the group stages or the Round of 16 on many occasions. On Tuesday evening, football fans will see a thrilling match between two fearless and passionate sides.

How well do you know European and world football? Want to challenge the best Fantasy Football Managers? Play www.fantasy-worldcup.com now!