Sergio Aguero deservedly stole the headlines after his hat-trick helped Manchester City to a 6-1 victory over Huddersfield Town on Sunday, but the most significant performance of the afternoon came from Benjamin Mendy.

Pep Guardiola regularly springs surprises with his team selections, and his decision to pair Aguero with Gabriel Jesus up front last weekend certainly raised a few eyebrows – particularly as all three of City’s wide men, Raheem Sterling, Leroy Sane and Riyad Mahrez, were on the bench. Given that Guardiola has continually emphasised the importance of stretching the pitch horizontally throughout his coaching career, this was – on the face of it at least – a curious decision. Yet when Mendy is one of your full-backs, the situation changes. City lined up in what was essentially a 3-1-4-2 formation at the Eithad Stadium, with the Frenchman taking up advanced positions on the left flank and the inverted Bernardo Silva offering a completely different option on the opposite side of the pitch. The Portugal international excelled in a central role in the 2-0 victory over Arsenal on the opening weekend, and here he roamed infield to link up with the likes of David Silva and Ilkay Gundogan through the middle.

During the title-winning and record-breaking campaign of 2017/18, it was Sane who provided the width on the left, with Sterling doing the same on the right but afforded greater license to move inside and central positions in and around the opposition penalty area. This was probably a case of Guardiola adapting after Mendy ruptured his anterior cruciate knee ligament against Crystal Palace in September, an injury which kept him out of action until April.

The Le Havre academy product had demonstrated his attacking qualities while playing for Monaco the previous season. Managed by the astute Leonardo Jardim, the principality club assembled a fantastic young team who stunned the continent by beating big-spending Paris Saint-Germain to the Ligue 1 title and reaching the semi-finals of the Champions League. Monaco employed a 4-4-2 formation for the majority of that campaign, with overlapping full-backs Mendy and Djibril Sidibe a key feature of their play (Bernardo Silva, incidentally, was fielded on the right-hand side of their midfield). 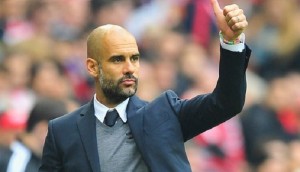 Mendy provided five assists in the league in 2016/17 and a further three in seven Champions League appearances. His rampaging runs and low, drilled cut-backs created numerous more chances for his Monaco team-mates, and we have already seen signs of how crucial the 24-year-old could be to supplying City’s abundance of attackers in the months to come.

Having registered two assists against Arsenal the weekend prior, Mendy took his tally for the season to three in the thrashing of Huddersfield, setting up Aguero’s third with a brilliant delivery into the box. He in effect created two further goals, driving forward in possession in the lead-up to Gabriel Jesus’ strike and delivering a brilliant centre which Ben Hamer spilled into Aguero’s path for the hosts’ third. His 12 crosses, meanwhile, were more than any other Premier League has provided this season, and also broke the highest tally by a City player in 2017/18 – a record held by Mendy himself, with 11 against Bournemouth. It was also notable how often the champions ventured forward down his side of the pitch, with 38.2% of their attacks funnelled down the left.

“Now we have Mendy, Mendy can attack wide,” Guardiola told the BBC after his side’s success on Sunday. “Last season, we could not do that because we didn’t have a [natural] full-back. Fabian Delph helped us a lot, and Aleks Zinchenko helped us a lot to play in that way.

“But with Mendy we can attack in a different way. He is a full-back with a condition to go forward. He likes to go forward, his physical condition allows him to do that. His physicality is outstanding, but in the final third he’s so clever. It’s not just cross to cross; he has the vision to make good crosses. Sometimes he puts it in front of the keeper, sometimes [he] puts the ball hitting back. That’s why we missed him a lot last season… to attack in different ways.”

Mahrez may have been the only major acquisition City made in the summer transfer market, but Mendy’s return to full fitness suggests the champions could be an even stronger proposition this season.