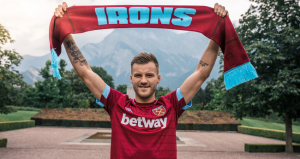 As Andriy Yarmolenko was stretchered off against Tottenham Hotspur, it was quickly apparent that he would be out for a while. However, it will have surprised many to find that it will be around six months until he’s back on the pitch due to a torn Achilles tendon. The injury came at the most unfortunate of times, as the Ukrainian had gained some momentum following a tough start to life in East London.

With that game ending 1-0 to Spurs, it was the second match in a row in which West Ham failed to score. Therefore, whoever does replace him on the right wing will have to get off to a good start and help top scorer Marko Arnautovic out in front of goal. Manuel Pellegrini has favoured the 4-3-3 which saw his side’s initial upturn in form so will likely be looking to put a direct replacement into the side so he can stick with this system, meaning he’ll have a dilemma as to who he assigns the role.

The most obvious choice in the minds of many would be Michail Antonio. The former Hammer of the Year even started the season on the right flank ahead of Yarmolenko. However, it is his poor performances which allowed the Ukrainian to get himself into the starting line up. So far this season Antonio has been underwhelming, as he has been wasteful with the ball at his feet and hasn’t looked as powerful as in the past. Neither Manuel Pellegrini and West Ham’s supporters seem to be overly impressed with the Englishman at the moment, so he will have to improve upon his showings so far this campaign if he is to fill the spot for such an extended period of time.

Another option is Robert Snodgrass. Having struggled in the early stages of his West Ham career the Scotsman is very much in Pellegrini’s plans. Snodgrass has been played on the right previously this season, though it seems as though the manager sees him as a central midfielder, with his last two starts coming in the midfield three. He hasn’t been able to completely hold down a place in the starting XI yet, so a move back to the right flank could be an option for the man who Pellegrini has openly shown he is a big fan of.

Academy graduate Grady Diangana is the last option. Prior to the 8-0 win against Macclesfield Town there will have been many a West Ham fan who didn’t even know who he is. However, his two goals and eye catching performance earned plenty of plaudits and the attention of his manager. So much so that when Yarmolenko was injured, it was the 20-year-old who was picked to come off the bench for the remaining 51 minutes- even with Antonio on the bench. His performance did his chances of getting more first team opportunities no harm, as he looked comfortable against a higher level of opposition than he is used to. His confidence allowed his technical ability to shine through and he arguably should have been awarded a penalty after a challenge from Harry Winks. If Pellegrini does opt to put Diangana in it would be a real showing of faith in the youngster, though after the two games he’s played many would say he deserves the chance.

Whoever he does pick will need to have a big game on Saturday against a Leicester side who will be determined to get a result following two losses in a row. They will also be directly facing Ben Chilwell, a man whose stock has risen considerably in recent times resulting in his first ever England caps. It will be a test for whoever is chosen, but for three men who have spent time on the bench recently it’s the perfect opportunity to show the manager they deserve to take the new slot in the team.