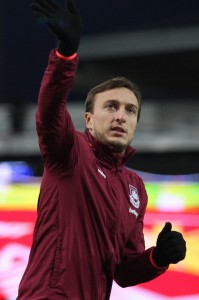 It seems as though West Ham’s squad is getting thinner by the week. There have been numerous absentees in recent times, with Andriy Yarmolenko and Marko Arnautovic among the most recent players to miss matches through injury. The latest man to become unavailable to Manuel Pellegrini is Mark Noble, though that is due to suspension rather than injury.

In the 38th minute of Saturday’s 1-1 draw against Leicester City, the Hammers’ captain was shown a straight red card for a reckless challenge on Wilfried Ndidi. This means he’ll miss three matches: tonight’s Carabao Cup tie against Tottenham Hotspur, followed by league fixtures against Burnley and Huddersfield Town.

This opens up a place in the team for somebody to fill, however the usual suspects aren’t available. In the midfield area alone Manuel Lanzini, Jack Wilshere, Carlos Sanchez and Pedro Obiang are all injured. Therefore, it seems as though either Conor Coventry or Joe Powell could play alongside Robert Snodgrass and fellow academy graduate Declan Rice in West Ham’s midfield three during his absence. Though there is a chance that Obiang will be available against Tottenham and Wilshere could return before the skipper’s ban ends.

Having come through the academy, both 18-year-old Coventry and Powell, who turned 20 yesterday, have only represented West Ham’s first team once, coming on as substitutes during the 8-0 win against Macclesfield Town, which set up tonight’s tie against Tottenham. Republic of Ireland U19 international and Dylan Tombides Award winner Coventry came on at half time and gave an assured performance. Powell replaced Michail Antonio in the 61st minute and provided Grady Diangana (who was also a debutant and has now earned his place in the first team) with two assists.

Another alternative could be Reece Oxford, who has been playing his football with the club’s Under 23s this season. Having impressed on his debut against Arsenal as a 16-year-old in 2015, there were high expectations attached to his name. Since then he has represented the club just 16 more times though, having loan spells with Reading and Borussia Monchengladbach. He is naturally a centre back, but having played in midfield, this could be his best chance of getting back into the first team fold under Pellegrini.

If one of the trio are to be called upon to start matches, tonight’s Carabao Cup tie could be the perfect way to introduce them. There is less pressure on them than in the league, while the club’s rivalry with the opposition and the chance to get a step closer to getting silverware ensures it still holds importance for everyone involved with the club.

Alongside this, there is a chance that Mauricio Pochettino will field a changed side. Tottenham faced Manchester City on Monday and following tonight’s match will play Wolverhampton Wanderers in the league and a must win Champions League game against PSV Eindhoven; all within nine days of Monday’s loss. The Argentinian will be desperate to get a trophy –having failed to do so during his Totenham tenure to date- and so will likely field as strong a side as possible, as was shown by his team selection against Watford in the last round. However, his hand may be forced by the build up of fixtures.

Youngsters Rice and Diangana have both thrived under the tutelage of Pellegrini in recent times, so the Chilean has already shown he is willing to put his faith in youth- even if injuries have contributed to some of the opportunities he’s given. With the number of absentees in midfield, either Coventry, Powell or Oxford could be the next academy player to be given a first team start.