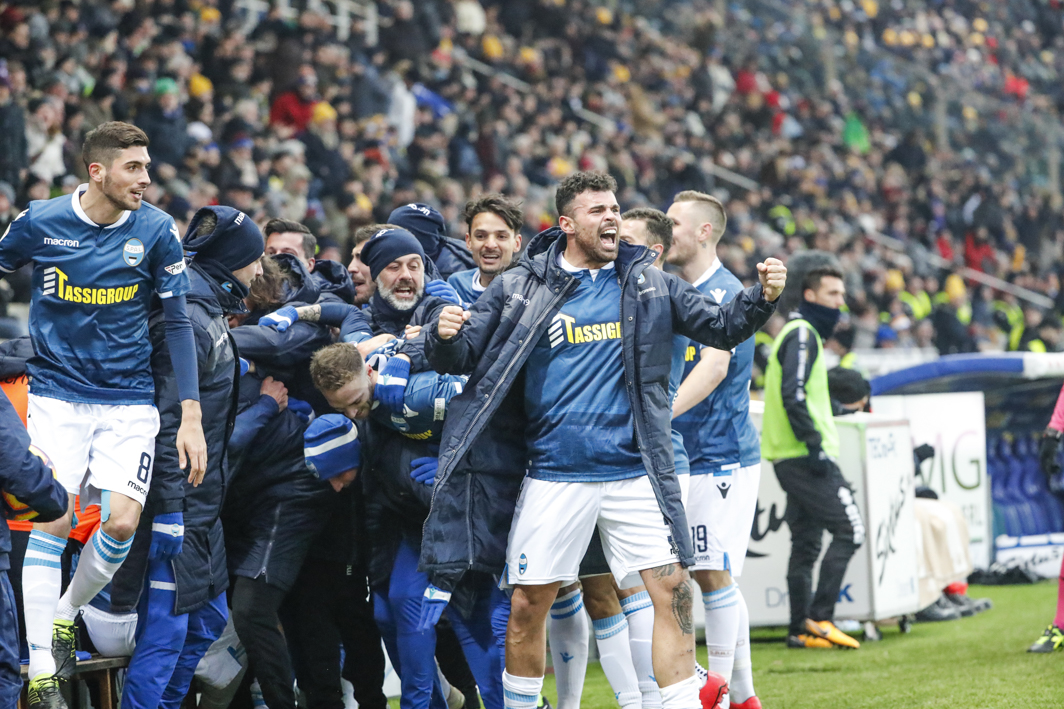 Standings implications: Juventus surged past Lazio late and saw their lead swell because Milan and Napoli shared the spoils. The Rossoneri remain fourth due to some ties behind them. Torino torpedoed Inter at home and re-emerged in the Europa League race. It was a Sunday of comebacks, as Atalanta erased a three-nothing lead against Roma and SPAL proceeded to win the game after being down two-nothing in Parma. Fiorentina outlasted Chievo in a rollercoaster of a game. Sampdoria and Sassuolo easily took care of business in the early Saturday matches, smoking Udinese and Cagliari. Frosinone surprisingly pounded Bologna on the road, re-emerging in the relegation race and putting the Felsinei in real trouble.

Confirmations: Fabio Quagliarella’s magical run continues as he drilled two penalties against Udinese and he has now tied Gabriel Omar Batistuta record’s and he will try to surpass it next week. Cristiano Ronaldo redeemed himself this time from the penalty spot. Khouma Babacar buried a penalty against Cagliari, while Luis Muriel opened the scored versus the Flying Donkeys. Federico Chiesa this time capitalized an all of his hard work and hit the net twice in terrific fashion on fast-breaks. Roberto Inglese’s brace was not enough against SPAL. A mixed performance by Sergio Pellissier, who converted but also missed a penalty, while Duvan Zapata had a similar display, missing from the spot but punching one home a minute later. Stephan El Shaarawy padded his stats with one more goal. Andrea Petagna headed home his seventh of the season. Andrea Pinamonti has become a sneaky fantasy asset lately, while Camillo Ciano is now up to six goals in the year. Christian Kouame broke the deadlock versus Empoli, while Antonio Sanabria scored on his debut.

Surprise scorers: Karol Linetty is usually more of a substance player, but he had his moment of glory on Saturday, netting his second goal of the season. Manuel Locatelli bagged his first with the Neroverdi thanks to an easy tap-in against the Sardinians. Filip Djordjevic has not gotten much playing time thus far, but he made the most of it against Fiorentina, keeping his team’s hopes alive in the final stages. Two more defenders produced for Atalanta: Timothy Castagne kept them from drowning at the end of the first half, Rafael Toloi revived them at the hour-mark. Two more players netted the first goal for their respective sides: Frosinone’s Paolo Ghiglione and SPAL’s Mattia Valoti.

Guess who is back: Edin Dzeko had struck out for three months in Serie A, but he finally snapped out of his drought with a brace in Bergamo. Manolo Gabbiadini scored on his first touch versus the Zebrette and his second appearance back in Serie A. Marco Benassi had not found the target in about two months, but his afternoon was not all rosy since he got sent off for a blatant handball. In that same game, Mariusz Stepinski made his return to the scoresheet after a five-game absence with a thunderous header.

Flops of the round: Cagliari and Udinese looked really lifeless in their road fixtures on Saturday. Bologna outdid them on Sunday versus Frosinone, when things snowballed on them after Federico Mattiello’s early red card. Inter were down few attackers in this one and their offensive woes continued.

Clutch goal: Mo Fares could not have picked a better time for his first goal with SPAL, as he blasted it home to complete a furious comeback in Parma.