At the time, it appeared a shrewd signing. A World Cup winner with Germany in 2014, Shkodran Mustafi looked to be a solid addition for Arsenal in the summer of 2016. The Gunners needed defensive reinforcements and the German, signed from Valencia for a fee of £35 million, seemed to fit the bill.

Since then, though Mustafi has become a perpetual source of frustration and exasperation for Arsenal fans. Never before has the Emirates Stadium faithful seen such an error prone player, and that’s saying something given the calamity merchants that have rolled through the club in recent years. On Tuesday, they were forced to watch another gaffe from the 26-year-old. 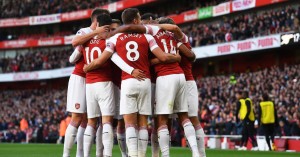 In Tuesday’s friendly against Al Nasr, played in Dubai following a few days of warm weather training during the international break, Mustafi was at fault. Again. The German fell over not once, but twice as he attempted to block Ronnie Fernandez for the opener, playing something closer to crab football than anything resembling the professional game. It was comical, although not from an Arsenal standpoint.

Of course, this was a meaningless mistake. This was just a friendly, but Mustafi has become a liability in much bigger games, in the Premier League and Europa League this season. At this stage, it’s remarkable that he continues to hold down a place in Unai Emery’s starting lineup.

Mustafi has failed time and time again to learn from his mistakes. His gaffes can be traced all the way back to last season, when costly lapses in concentration were made in the Carabao Cup final against Manchester City and Premier League games against Southampton and Newcastle United.

The German has carried his gaffe-prone ways over to this season. He is a source of the defensive insecurity that continues to dog Arsenal in the post-Arsene Wenger age. Emery has done his best to overhaul the culture of mediocrity that lingers at the Emirates Stadium, but until players like Mustafi are cast aside he won’t be able to do that entirely.

Arsenal must look to sell Mustafi as soon as possible. Far too frequently in the past the Gunners have shown faith in players who do not deserve it. Mustafi is one such player and so even if it takes taking a financial hit, which would likely be the case, the 26-year-old must be pushed out the door.