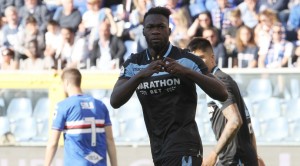 Ferocious Champions League races have become something of a theme across Europe this season with teams from England, Germany and Spain taking the top four fight to the final few weeks.

Nowhere is the battle as competitive as in Italy, though, where four points separate five teams between fourth and eighth place with four rounds of action remaining.

For Lazio, the jig appeared to be up when they fell to a harrowing 2-1 defeat at home to relegated Chievo over Easter weekend.

But while the Roman club remain the outsiders in this race, currently propping up the chasing pack in eighth place on 55 points, Sunday’s meeting with Atalanta provides Simone Inzaghi’s team with a golden opportunity to propel themselves back into contention.

Victory would take Lazio within a point of their opponents, who currently occupy the fourth and final Champions League spot, as well as providing a serious morale boost in what is a dress rehearsal for the Coppa Italia final that will take place between the same teams at the same venue in less than a fortnight.

For many, Lazio’s trip to Sampdoria last weekend looked like it could be the game that ended their top four hopes, as the capital club made the trip in the absence of key players Luis Alberto, Sergej Milinkovic-Savic and Stefan Radu.

In addition, top scorer Ciro Immobile was rested after a hectic recent schedule as Inzaghi picked a heavily rotated side at the Stadio Luigi Ferraris.

The 2-1 win that followed came courtesy of a superb first half performance that saw Felipe Caicedo score twice early on before Gaston Ramirez was sent off for the home side.

That red card should have made it a comfortable afternoon for the visitors, but Samp mounted a second half fightback, pulling one back and hitting the post as Lazio scraped the three points.

Despite the result not coming easily – this is Lazio, after all – it did raise some thought-provoking questions for Inzaghi ahead of Sunday’s decisive meeting with Atalanta.

The Lazio coach has too often been let down by his star players this season, with Milinkovic-Savic and Alberto in particular looking like shadows of the players who tore Serie A defences to pieces on a regular basis last season.

Even Immobile, who has been incredibly prolific since joining the club in 2016, has struggled for form since the turn of the year, scoring just two goals from open play.

Inzaghi is now left to consider whether to reinstate Immobile and Alberto to his line-up this weekend, with Milinkovic-Savic still recovering from injury, or stick with the players who stepped up to deliver an impressive result and performance in their absence.

Danilo Cataldi, a product of the club’s youth system and lifelong Lazio fan, started in midfield.

When he left the pitch on the 77th minute to be substituted, he still had a 100% pass accuracy rate after a tidy performance. The Italy international’s opportunities have been limited this season, but he has barely put a foot wrong when given a chance.

Marco Parolo may not be the flashiest player in the world but he runs harder and further than any other player in the squad and provides vital leadership in the centre of the pitch that his more celebrated team-mates don’t.

However, the coach’s greatest selection headache revolves around whether to stick or twist with his forward line.

Caicedo and Joaquin Correa started together for the sixth time this season in Serie A against Samp and all six games have ended in victory.

On form, it is hard to find an argument for Immobile at the moment. While the Italy striker has been chipping in with valuable assists recently, it has been his Ecuadorian team-mate who has been the difference-maker.

Caicedo has now scored four goals in his last three league games and, unlike Immobile, has surged into form in 2019 with seven strikes; only Andrea Petagna, Fabio Quagliarella and Duvan Zapata have scored more this year in Italy’s top flight.

In fact, according to Lazio Page, the 30-year-old’s brace in Genoa saw him rise to number seven in the goals-per-minute standings for players with at least five Serie A strikes this season.

He has found the net on average once every 152 minutes; only Moise Kean, Zapata, Cristiano Ronaldo, Quagliarella, Arkadiusz Milik and Krzysztof Piatek have done better.

It could be argued that these are good problems to have, but Inzaghi can’t afford to get his selection wrong this weekend if he hopes to make a late surge into the top four.

Cup final fever has started too, with the Curva Nord section of the Stadio Olimpico already completely sold out as anticipation mounts ahead of another momentous day for the club.

It has been a season of inconsistency for Lazio and Inzaghi now faces a key question that could determine how it will end – does he go with form or reputation?