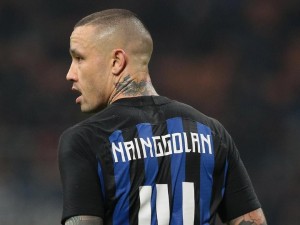 Radja Nainggolan spoke to the media in the immediate aftermath of Inter’s 2-1 victory over Empoli last night, which secured their passage to the group stage of next season’s UEFA Champions League. Indeed, the Belgian scored the goal which ultimately allowed the Nerazzurri to achieve their main objective, but reserved special praise for the club’s fans for their support throughout the match. Here is what he had to say:

“We could have scored more and taken four or five chances before Handanović then also saved us multiple times. We had to win at all costs because the other teams did what they needed to do and we could only worry about ourselves. Personally, I’ve always worked hard and given my all, I hope that the fans keep supporting us regardless of who is on the pitch because they gave us a big hand today. In the dressing room, there was a sense of euphoria at qualifying for the next Champions League, we’ll enjoy the moment and rest a bit before going again.”

Senegalese winger Keita Baldé, who scored the opening goal of the evening shortly after half-time, also had his say on Inter’s achievement: “It was very important to come on and shake things up. My teammates expected this and I felt the confidence of everybody. I needed to make an impact for myself and everyone else. Scoring is great, but the win was the most important thing. Last year, I watched the final matchday on TV. Today, I’ll enjoy this victory. At the end of the day, what counts is the final result. I’m very happy to be able to wear this shirt, it’s been a year of highs and lows but it’s been great wearing this shirt.”