If someone told you that for a relatively small buy-in, you could own part of a European soccer club with Champions League aspirations, you’d be all ears, right?

Well, U.S. soccer fans need wait no longer, for that is now a reality thanks to FC Pinzgau Saalfelden, an Austrian third-tier club based in the shadow of the Alps and managed by Christian Ziege, a former German international and Bayern Munich, AC Milan, Tottenham Hotspur, Liverpool and Middlesbrough star.FC Pinzgau was founded on May 23, 2007, by Christian Herzog, Siegi Kainz and Herbert Bründlinger, so it is still in its infancy.

More recently, the Austrian trio have been joined by three Americans: Marc Ciociola, who had an ambitious plan to own a European soccer club that was born out of the frustration of not getting any tangible benefits as a supporter and season-ticket holder of his local team, Real Salt Lake; Trey Fitz-Gerald, a 27-year media and marketing veteran in professional sports who has credibility within U.S. soccer circles for his involvement in five organizational launches including Real Salt Lake; and Steve Paris, a businessman of 25 years, with experience in both big corporate and startup settings.

Since the two groups of owners have joined forces, the vehicle “Fan Owned Club,” or FOC, has come into being. This isn’t a token offering or marketing spiel, where you might be mailed a certificate to show your friends but receive little else in the way of actual ownership.

For your investment as a “Fan Owner” at FCPS, you get unprecedented access to, participation in and influence of key club operational and strategic decisions. Whichever way you look at it, that’s pretty cool.

FCPS came about because of the merger between Saalfeldner SK (established in May 1947, with blue and yellow colors) and ESV Saalfelden (established in 1952, with white and green colors). The former was the club of businesspeople, the latter for the workers, so there were a number of hurdles to overcome before FC Pinzgau Saalfelden came into being.

A sporting crash, for want of a better term, ensured that, for the good of the area and the locals, the owners of both clubs needed to bury their differences and find a workable solution.

Weeks of talks followed before it was decided that the club would be called SG Saalfelden, with the youth teams playing at the old SK Saalfenden pitches in the center of the city and the first team at ESV’s stadium, the current Saalfelden Arena. 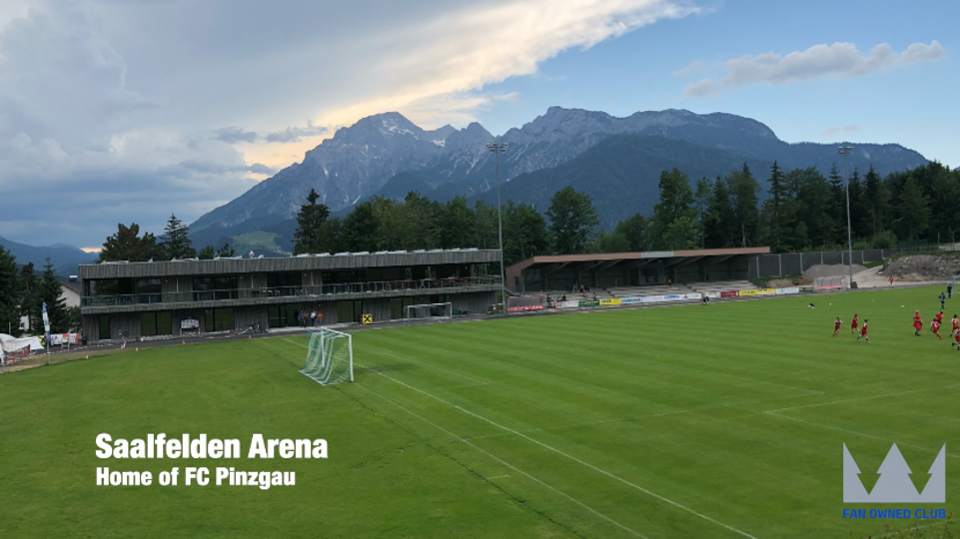 Inserting the name of the region, Pinzgau, into the official club name came a little later, and there was pushback from other sides in the area as the newly formed team quickly asserted its authority. Jealousy, as always, was a terrible affliction, and it would follow the club everywhere.

It perhaps didn’t help that the first coach of the FCPS senior side was Wolfgang Feiersinger, a well-known footballer from Saalfeden who had won the Champions League with Dortmund.

Despite the criticism, the Austrian owners wouldn’t be deflected from the changes they wished to make, and the club was eventually christened FC Pinzgau Saalfelden, or FCPS for short.

Staying as an amateur side suited all three owners at that point, and becoming a professional outfit, although discussed, was never really on the table. Consistently being the best in the area meant that conversations would always take place as to how the club could be taken to the next level, but with none of the owners sure as to how they could get to that point, discussions often led to nothing.

Over the course of the next few years, FCPS won its first-ever promotion from the Salzburger Liga, Austria’s fourth tier, into the Austrian Regionalliga West, one of four regional leagues in the third tier.

Their title winning campaign of 2010-11 was incredible even by their own successful standards, with 24 wins, three draws and just three losses, and a goal difference of +50.

A see-saw existence for a few seasons saw Markus Fürstaller eventually installed as the coach at the beginning of the 2014-15 season, and he would stay for four years, finishing 12th, 8th, 12th and 15th.

The team wasn’t playing badly, and the club was doing okay off of the pitch too, but relative mediocrity hadn’t been envisaged by the Austrian owners. It was perhaps serendipitous, then, that around that time, Ciociola heard of the existence of FCPS and decided to pitch to the Austrian owners the idea of having the club become “fan owned” in order to help take them to that next level.

Suffice to say that all three were a little reticent, but gracious enough to hear what Ciociola had to say. It was probably his enthusiasm for the project that eventually won over Herzog, Kainz and Bründlinger, and then another moment occurred that would end up shaping the future destiny of the club.

Alessandro Ziege joined the club, a signing that wouldn’t raise eyebrows until it was understood that his father was the former German international Christian Ziege. After the club canceled Fürstaller’s contract as coach during the season, the elder Ziege offered to help train the team. At the same time Mark, along with Trey and Steve, were finalizing their negotiations to make Fan Owned Club a reality.

As they did so, back in 2019, Trey managed to persuade Christian Ziege to sign a long-term contract to manage the club, and in so doing, FCPS quickly made the headlines once more.

The premise for the new venture, with all six co-owners playing a significant part, was simple.

With the new owners also able to broker deals with U.S. teams, FCPS has seen an influx of American players, as well as others from across Europe, and prior to the onset of the coronavirus pandemic, the club was preparing to contest the Austrian Eliteliga West playoffs for the first time ever.

A magnificent campaign under Ziege had seen promotion to the second tier quickly become a very real prospect, but at the time of writing, it appears that this will, unfortunately, be denied.

There can be no doubt, however, that FCPS is a club going places.

If you hadn’t already heard about FC Pinzgau Saalfelden/Fan Owned Club, then you soon will, and maybe you’d like to join them for the ride. Interested fans can pick up a piece of the club here.