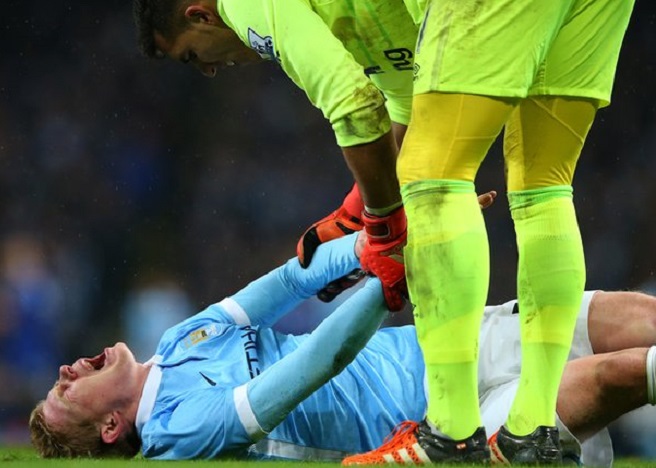 Manchester City’s title hopes have been dealt a cruel blow with the news that influential playmaker Kevin de Bruyne could be out for up to two months.

The Belgian reportedly suffered medial knee ligament damage in his side’s win over Everton on Wednesday evening after appearing to catch his studs in the turf and fall awkwardly.

Manuel Pellegrini remained positive after the match during his press conference, confirming that de Bruyne will go for a scan today. But he admitted that his medical staff had diagnosed a medial ligament problem at first sight – a condition that will keep him out for up to eight weeks.

When asked of the extent of the injury, Pellegrini replied: “We will see tomorrow. The doctor thinks he has a problem in his medial ligament but it is impossible to know before tomorrow.

“It is very difficult to know in this moment but I am optimistic he will not be out for the rest of the season.”

If the eight week absence diagnosis is correct, then de Bruyne will miss key Premier League fixtures including the Manchester derby and ties against Spurs and Leicester City, the Capital One Cup final against Liverpool as well as both legs of his side’s Champions League meeting with Dynamo Kiev.

Wednesday had been a good day up until that point for the 26-year-old: he had come off the bench to score one goal and create another in City’s 3-1 Capital One Cup semi-final win over Everton, but after an awkward collision with centre back Ramiro Funes Mori he was left writhing in agony.

De Bruyne has been in fantastic form for the Manchester side this term, notching 12 goals and 14 assists in just 31 appearances – and that run of form has kept his side firmly in the race for four trophies. Pellegrini and City’s supporters will be hoping the prognosis is better than first feared.

One player who was forced to apologise for his behaviour immediately after de Bruyne’s injury is Everton keeper Joel Robles, who tried to haul the Belgian to his feet after appearing to accuse him of playacting and time wasting.

The stopper took to Twitter after the match and wrote: “I would like to apologise to Kevin de Bruyne for my reaction to his injury. In the heat of the moment I didn’t realise he was badly hurt.

“I wish him all the best and a speedy recovery.”