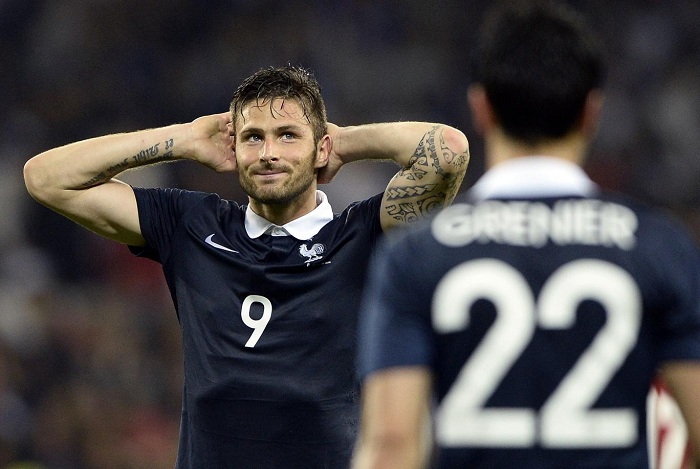 Arsenal striker Olivier Giroud was booed by supporters in France’s 3-2 win over Cameroon on Monday, and national team manager Didier Deschamps leapt to the defence of the under-fire centre-forward by suggesting the fans are treating him unfairly ahead of this summer’s European Championships.

“You hear what you want. The whistles were unfair tonight, but in Biarritz, he was applauded. People can be conditioned. But Olivier scored again. When you say it, you are not helpful. You are free to say what you want but this is not necessarily the truth,” said Deschamps.

French fans have been disappointed with Giroud’s performances of late, but the Gunners striker did score for Les Blues in the Cameroon victory. However, an overall return of 14 goals from 46 games for France isn’t as prolific as expected from a striker.

His performances have been inconsistent too, with the centre-forward often struggling to enforce himself in games. He wouldn’t have been a first-choice in attack for France in this summer’s European Championships, but with Real Madrid striker Karim Benzema not selected for the squad, Giroud should lead the line.

Atletico Madrid’s Antoine Griezmann is likely to start as a wide forward, but supporters aren’t happy that Olivier Giroud gets top billing spearheading the attack given he’s scored just five goals in his last 16 games. There were a number of attackers omitted from the squad in place for the Arsenal man, which is also why he continues to get booed.

Hatem Ben Arfa (OGC Nice), Kevin Gameiro (Sevilla), Alexandre Lacazette (Olympique Lyonnais) and Nabil Fekir (Olympique Lyonnais) were some of the recently-capped players to miss out in the squad. Deschamps’ squad selection was met with criticism, but only time will tell if his faith in Giroud will bear fruit.

He came into the France squad this summer after the back of scoring and creating six goals in his last three Premier League games, and has netted for his country recently too, so Giroud isn’t in bad shape now. The 29-year-old does have mobility deficiencies at times as he’s the least agile of the France attack, but he does have his strengths.

Giroud will bring aerial superiority to the France attack, and brings others into play by playing with his back to goal. He lays the ball on for the pacey wide men on the overlap, and is useful to play off when turning defence into attack. He’s scoring goals in the build-up to Euro 2016, so can Giroud confound his critics?