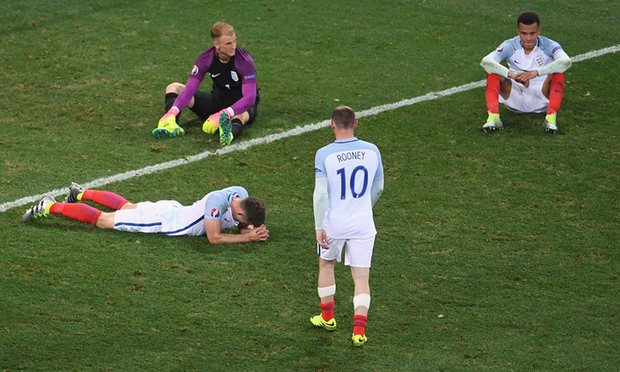 England crashed out of Euro 2016 to Iceland in what has been seen as one of the biggest shocks in a major tournament. England were embarrassed when they lost 2-1 and came up with scant ideas to reduce the deficit. Moments after the game England manager Roy Hodgson resigned after being in the managers hot seat for four years.

For Iceland this was by far their greatest victory in their history- they had never made it to a major competition before and now their reward is a quarter final date this Sunday with hosts France.

The game had started at a frantic pace with England taking a fourth minute lead after Raheem Sterling was adjudged to have been fouled in the box by Iceland’s goalkeeper. Replays showed that the ball was nowhere near the player and on reflection this seemed like a harsh choice on the Icelanders. Wayne Rooney who may well have played his final game for England took the penalty as he rolled back the years and directed his shot magnificently. It would be the only bright spark of Rooney and England’s night.

But just when things seemed to be going England’s way Iceland struck back for an equaliser just two minutes later when Ragnar Sigurddson ran past into the area and unmarked sliced the ball past a hapless Joe Hart. Twelve minutes later and Iceland from being a goal behind were now in front when Sigthorsson after what seemed an eternity of passes on the edge of the England area aimed to shoot and the ball trickled over the line from what was in reality a poor shot. Was Hart blinded?

From then on in much of the possession was as one would think with England but chances were only half hearted and England will think that they rarely tested the Iceland goalkeeper and the back four. Indeed if any team was to get another goal it felt like it would go to Iceland who had at least four golden opportunities to increase their lead.

This was a magnificent result for Iceland- but it wasn’t a magnificent game by them. What had happened in stark reality was that they were playing a team in England who were just that much poorer than them. The result is heightened of course given how ‘good’ England should have been with all the players professional experience. This match had to rank as one of England’s worse defeats even if Iceland have had a good 12 months worth of results. One must remember that a nation that holds over 60 million people just lost to one that has 330,000.