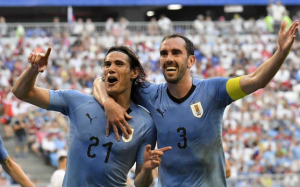 Two contrasting styles will take to the Fisht Olympic Stadium on Saturday as Uruguay face Portugal.

Both have their merits and weaknesses and as the stakes get higher, we could be in for one of the games of the tournament so far.

Cristiano Ronaldo will be keen to continue his goal scoring form from the first couple of group games, and his prowess in front of goal could well be needed if Messrs. Suarez and Cavani are in the mood for Uruguay.

Three goals for the striker against Spain were all as a result of Spanish mistakes or poor decisions, and Portugal weren’t able to build on the one he scored against Morocco.

Were it not for Quaresma’s world-class strike against Iran, they’d have gone out at the group stage.

There just seems to be a lack of bite in the team. Not enough personnel seem to be ready to go to war, unlike during their successful run to the European Championship crown.

Not only will Uruguay bring some south American flair, but they’ll also bring grit, determination and physicality, and no one in their side embodies what they are about any better than Diego Godin.

He is a colossus for club and country and will drag the team kicking and screaming through a game if he has to.

Pepe does a similar job as his contemporary, but frankly is no longer in the same class as Godin.

He has shown once again in this tournament what a disgrace and embarrassment he is to his country with his pathetic acts of simulation when hardly touched.

Suarez will know that if he can rattle Pepe’s cage early enough, a card will be forthcoming and that will effectively take the Portuguese centre-back out of the game.

Jose Fonte alongside Pepe is robust, but you wouldn’t class him as a real warrior.Ditto William Carvalho in central midfield. A man mountain of a player, but far too easily knocked off of the ball, that is when he can be bothered to go looking for it.

Getting involved at the coal face isn’t something the big man is too fond of. By way of example, he made one tackle in the entire 90 minutes against Iran.

Quaresma, Bernardo Silva and, if he ups his output, Goncalo Guedes, can all be dangerous alongside Ronaldo going forward, but not one of them have shown that they can mix it when the need arises.

Godin will marshal the troops and put in a shift, and, like a snow plough in defence, he’ll take out anything in his path if he has to.

That’s the mentality that Portugal need if they want to progress even further after Saturday evening’s match.

How well do you know European and world football? Want to challenge the best Fantasy Football Managers? Play www.fantasy-worldcup.com now!