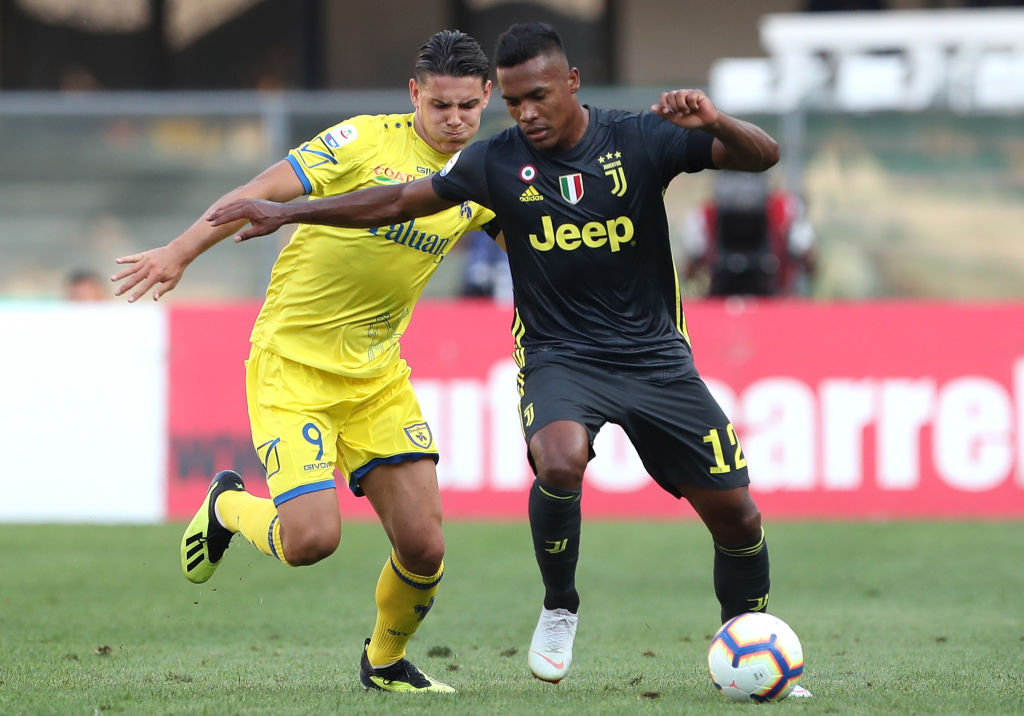 A couple of games in the first round were intense and high scoring: Parma-Udinese deserves an honourable mention, especially because the Friulani did not give up after the two-nothing goal, but Chievo-Juventus was undoubtedly the most compelling match. On Cristiano Ronaldo’s debut in Serie A, two other players shined brightest: Emanuele Giaccherini and Federico Bernardeschi.

As for the line-ups, Massimiliano Allegri opted for a very offensive 4-4-2 with Ronaldo and Paulo Dybala upfront, Juan Cuadrado and Douglas Costa on the flanks and Miralem Pjanic and Sami Khedira in the midfield. Roberto D’Anna maintained his 4-3-3, but made some defensive adjustments with Nenad Tomovic at right back and Nicola Rigoni in the midfield over Pawel Jaroszynski, Fabio Depaoli and Joel Obi. Mariusz Stepinski was selected instead of the newcomer Filip Djordjevic.

As per usual, Juventus immediately tried to take control of the game and found the target on the first try, with Giorgio Chiellini flicking on a free kick towards an unmarked Sami Khedira, who slotted it in from the heart of the box. However, going up in the score early worked against the Bianconeri, who got a little complacent and tried for a good half an hour to find the proper way to feed Cristiano in a dangerous position.

While the road team had the lion’s share of possession, the Flying Donkeys did not renounce attacking: on the contrary, they had almost perfect conversion rate on their forays. Giaccherini was able to take advantage of the opponent’s offensive scheme and at the 38th minute when he picked out Mariusz Stepinski, who slipped past Leonardo Bonucci and got open in the box in the no man’s land between the two centre-backs and easily headed it in.

Giaccherini stroke again at the beginning of the second half, when he skittered down the left flank with little opposition, took on Joao Cancelo in the box and the fullback mistimed his tackle, fouling him. The former Napoli and Juventus winger then wrong-footed the Wojciech Szczesny from the penalty spot at the 58th minute.

Allegri immediately inserted Bernardeschi for Cuadrado to try to muster some more convincing offence, but Juventus really turned it on ten minutes later, when Mario Mandzukic replaced Douglas Costa, with Ronaldo moving to the left flank. Given more room and no longer guarded closely by several opponents, the ex-Real Madrid star uncorked a pair of his customary runs and wreaked havoc, also freeing a clear path for Alex Sandro.

The Italian Champions tied the game with thirteen minutes to go, with Mattia Bani beating his own goalie while duelling with Leonardo Bonucci on a corner kick. Juventus smelt blood and a Ronaldo’s robust attempt was miraculously palmed away by Stefano Sorrentino, who also intervened on a dangerous header by Emre Can.

The Madama scored on Mario Mandzukic’s tap-in after a ricochet in the box, but it was disallowed because Ronaldo both trucked Sorrentino, who had to leave the game with all sorts of upper-body injuries, and committed a handball. After a lengthy stop to attend to the goalkeeper, Bernardeschi got open just outside the six-yard box on another Alex Sandro deep run and that was the ball game.

Even though some of the most anticipated players did not pick up points, it was still reasonably prolific for both sides as Giaccherini earned six points, Bernardeschi, Khedira and Stepinski got four, Chiellini and Sandro one for their assists.