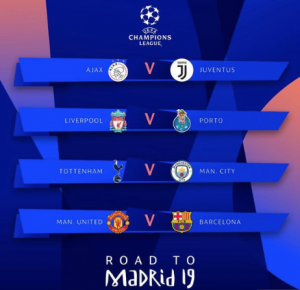 As with any Champions League draw, the supporters of the remaining participants were waiting with baited breath for the news from Nyon, Switzerland.

Barcelona were the second to last ball drawn by which time there was only one opponent left in the bowl – Manchester United.

The Catalans have good recent memories of their clashes with the Red Devils.Though they were knocked out in the 2008 semi-finals thanks to a wonder-strike by Paul Scholes, the Blaugrana had been much the better side over the two legs, and United had some good fortune to thank on the night to ease their passage to Moscow.

A year later the roles were reversed with United dominating the opening exchanges of the 2009 Champions League final, only for Samuel Eto’o to open the scoring for the Catalans.

From then on, it was Barcelona’s trophy to lose.

In 2011, there was never any doubt where the title would end up. United were simply cut to ribbons and even Sir Alex Ferguson admitted that it was the most one-sided defeat he’d ever been on the wrong end of at the club.

Pep Guardiola’s swashbucklers were imperious in all facets of their work.

Perhaps with those three performances in mind, cules have been rubbing their hands together because they avoided the likes of Juventus and Manchester City.

However, they should not be underestimating a United side who are playing their best football of the season thanks to Ole Gunnar Solksjaer’s impact at the club.

Were Jose Mourinho to still be at the helm, it would make great copy for the headline writers but United would’ve been dispatched with ease.

Now, though Barcelona remain favourites, the Red Devils have enough about them to cause problems.

For a start, there are a number of players who are six foot plus, and at least three or four who have pace to burn… both of which Barcelona’s defence have struggled against in the recent past.

With nothing to lose too, the pressure is all on Ernesto Valverde’s team to get the right result.

One of the quirks of the draw saw the first fixture reversed, in that United were supposed to play away, but will now play the opener at home.

Depending on how that pans out, heading to the Camp Nou for the decisive second leg could prove hugely problematic if Barca are in the mood.

As long as the Blaugrana afford United appropriate respect but play their natural game they should still have enough to go through.

However, as PSG found out, take them lightly and their desire, nous and will to win makes them the most dangerous of opponents.

Do you have what it takes to challenge the best Champions League Fantasy Managers? If you’re up to challenging the best then play www.fantasy-champions-league.com