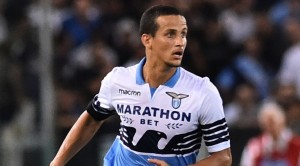 A win for Lazio over Udinese in their rearranged Serie A match this week has kept Simone Inzaghi’s side hanging on by their fingernails in the agonisingly tight race for Champions League qualification.

There is much still to play for this season, with a Coppa Italia semi-final second leg against AC Milan approaching next week (the first leg finished 0-0) after a must-win league meeting with relegated Chievo on Saturday.

Lazio’s summer transfer market activity is likely to be dictated largely by how the next month or so plays out; Champions League football would raise expectations and possibilities, no European football at all would have the opposite effect.

That hasn’t stopped speculation from swirling, though, and this week the Daily Mail reported that Tottenham Hotspur have taken an interest in Biancocelesti defender Luiz Felipe.

Vague reports of ‘interest’ from Premier League clubs in Lazio players are nothing new, but it did at least serve to highlight what an eventful season this has been for the young Brazilian who, while yet to emerge as an undisputed first choice or develop into one of Serie A’s best young defenders, has shown plenty of signs that he is capable of doing both.

Born in Colina, near Sao Paulo, on 22 March 1997, Felipe was whisked over to Italy in 2016 after being spotted playing for Brazilian Serie D side Ituano in his home country.

He had barely unpacked his bags before being diverted south to Salernitana, where he spent the 2016/17 season on loan but struggled to break into the team or impress when handed opportunities.

However, Felipe soon benefitted from Inzaghi’s faith in youth as the former Lazio youth team coach brought him into the Aquile first team squad last season, where he made 31 appearances in his first experience of top-flight and Europa League football.

The youngster would’ve been forgiven for looking a bit daunted, or even out of his depth, at being thrust into this elite echelon of football with just seven disappointing games in Serie B on his CV. However, he soon established a reputation as a technically gifted, intelligent defender with great potential.

Felipe appears most comfortable in the centre of Inzaghi’s back three, where he deputised for Stefan De Vrij on occasion last season before doing the same at times for Francesco Acerbi this term – including during Wednesday’s win over Udinese, when Acerbi was shifted out to the left.

The immovable status of De Vrij and subsequently Acerbi meant that Felipe’s chances more regularly came on the right of the three-man defence, the position that has seen the most chopping and changing of all in Inzaghi’s Lazio; Wallace, Bastos, Martin Caceres, Felipe and Patric have all taken turns at being considered first choice in the role.

Felipe himself insisted after the Udinese match that he doesn’t have a preferred position. “I just like playing,” he said. “If it’s in the centre, on the right or left it matters little. There’s no problem, I respect the decision of the coach.”

A quick, agile and smart player, Felipe’s style of defending has had some of the more excitable fans describing him as in the Alessandro Nesta mould. While he still has lightyears to go before being talked of in the same bracket as one of Lazio’s greatest ever defenders, you can understand where the comparison comes from.

Felipe is blessed with instinctive timing and judgement. He is a graceful defender, who has a knack for anticipating the right moment to go off his feet, step forward to intercept a pass or throw himself into a block. He is not a physically dominant bully of a defender by any stretch of the imagination, but looks every inch the modern-day centre-back; a player comfortable with the ball at his feet but who understands the art of defending.

At the start of the season, after his regular involvement last term, hopes were high that Felipe would cement his place in Inzaghi’s team. Injury niggles have interrupted his progress, with the Brazilian twice facing spells on the sidelines, but he has done enough to find himself at the centre of a national team debate.

Luigi Di Biagio called the defender up to the Italy Under-21 squad during the last international break in March, but Felipe soon left the training retreat after reflecting on his situation and deciding he would prefer to represent Brazil. You can’t fault his ambition.

“It was a difficult choice because Italy is also a great national team, but football is about the heart and my desire is to play for the Selecao,” he said.

“I didn’t accept because I want to continue to follow the dream I’ve had since I was a child, to wear the green and gold shirt. I will continue to work to improve every day, to make this desire a reality.”

The Brazilian Olympic team appears to be a more realistic prospect for Felipe at this stage, with the Tokyo Olympics coming up next year, but everything depends on whether the youngster can nail down a regular place in Inzaghi’s team and finally make the right centre-back spot his own.

There will certainly be defensive changes at the club this summer, regardless of their final position in the table. Dusan Basta is leaving at the end of his contract, Jordan Lukaku looks destined to follow, while Wallace is widely reported to be heading out and the likes of Bastos or Patric could realistically depart if a suitable offer arrives.

As for Felipe, he is seen as one of the great young hopes of this Lazio side and is in a good place to achieve his goal of representing his country, repaying the faith shown in him by Inzaghi in the process.

He may not be Nesta, but the Brazilian possesses the tools to make real waves in a Lazio shirt. It’s now up to him to prove that his hopes of pulling on a green and gold shirt aren’t farfetched.