Without a doubt, Manchester United will be one of the main clubs that will be going all out within the summer transfer window, when compared to the other sides in the Premier League and in the whole of Europe. Following the embarrassing season they have experienced through both Jose Mourinho and Ole Gunnar Solskjaer, they will now look to make a huge statement off the pitch.

However, the full attention happens to be just on the hopeful incomings, rather than the players that may leave on a free transfer and those individuals whose services are no longer needed. With a lot of deadwood still remaining at the club along with the team’s squad depth being really thin, a lot of planning and top recruitment is badly required in order to have a successful summer window.

After spending ten long years at Old Trafford, Antonio Valencia will be leaving the club at the end of June with the full appreciation of the Manchester United supporters. From playing consistently as a winger to being utilised as a makeshift right-back over the last couple of years, the Ecuadorian never failed to wear his heart and passion on his sleeves despite being regarded as a very limited player.

Majority of people will be content with the displays he has produced but some will be unsatisfied with how he failed to reach his true potential as a dominant and effective winger. The 33-year-old went on to make just fewer than 350 appearances in all competition, whilst winning the league on two occasions, the EFL Cup on two occasions, the FA Cup as well as the Europa League in 2017.

Whether he stays or leaves, Juan Mata’s time at both Manchester United and Chelsea will be seen as quite underrated as a whole, purely because of how he played out of his natural position and how it prevented him from being at the heart of each attack. Even during his time out wide on the flanks, he was still able to create chances for the team whilst also getting the best out of his team-mates.

On the other hand, the attacking midfielder could make a return to Spain and do quite the job for the likes of Sevilla, Valencia or even Atletico Madrid, who are always looking to improve in the league and in Europe. At the end of the day, many will be unsatisfied with how Juan Mata went through four United managers, who failed to play him in his best role, which is behind the forward.

The one player that will be leaving on a free transfer that has shocked the Premier League experts and most importantly the United fanbase is no one other than Ander Herrera. A complete midfielder who has always been effective and consistent on the pitch, and is also seen as quite the type of vocal leader when necessary, which is something that the current squad is lacking from top to bottom.

Overall, some of the folks will not be too angry with his departure as he apparently wanted £200,000 a week, which does seem extortionate for someone who does not play regular football. However, when the likes of Alexis Sanchez, Luke Shaw and Paul Pogba are on a lot of money whilst not proving to be consistent or reliable enough, you could see why Herrera cheekily demanded a massive pay rise. 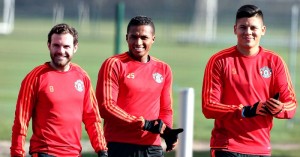 By now, the board and Ed Woodward will have analysed which players will be part of the club’s long-term plans, and which individuals they feel that don’t have a future at all at Manchester United. And although Ole Gunnar Solskjaer is only the interim coach at this moment of time, the hierarchy will surely be asking for his comments and vital opinions on who should be kept at the club at all costs.

On the other hand, some of the players who are used as a squad rotation will be given a few more chances to prove themselves before the current season is over. The Red Devils don’t have too much deadweight to carry like they used to a couple of years ago, however, there are some players that have been at the club for far too long or are simply not good enough for Premier League football.

Looking at the first team line-up as well as the squad depth as a whole, it can be easily stated that the club are in need of four to five new additions before they can mount a serious challenge in all competitions. And in order to achieve this, they will have intelligently sell a number of players during the summer transfer window, before they can go on to bringing anyone over to Old Trafford.

Although a lot of the focus is on either Chris Smalling or Phil Jones as the main weakness within the backline, not much has been mentioned or stated about the right-back Antonio Valencia. Despite being a natural winger in his peak years in the Premier League, he has shown to be a player that can just about defend his area whilst his attacking and crossing ability has become non-existent over the last number of seasons.

With his contract coming to an end in the summer, it would be ideal for the club to let him go on a free transfer or give him a contract and then sell him off for a small amount of money. In the end, as long as he is far and far away from the club before the next footballing season, then shall Manchester United’s defence be able to move forward as a whole on both sides of the pitch. Without a doubt.

Juan Mata has been in the Premier League for a really long time, and the only shame is that he spent most of his time in England as a right-winger rather than in his favourite position in the number ten role. The former Chelsea and Valencia player has never failed to come up with the assists and goals when it was much needed, though, he has been unable to produce the numbers on a regular basis.

As a whole, he simply does not have the pace or the physical ability to start as a winger, which dents United’s chances of producing successful counter-attacks. If the board and Ed Woodward are clever, they aggressively sell the attacking midfielder as he still has value and can become a superstar at a lower club, and it allows them to recover a fair amount they once spent on Juan Mata in 2014.

It’s actually incredible to see that Marcos Rojo is still a Manchester United player, someone who is constantly on the sidelines with injury problems here and there whilst receiving a contract extension that he simply did not deserve. Believe it or not, the centre-back has made the same amount of appearances for Argentina at the 2018 World Cup and for Manchester United so far this season.

Unfortunately for the 28-year-old, he has failed to achieve the potential he once had when he joined the club and has time and time again, proved to be an ongoing liability in the back line whenever he starts. Given that he is out of his depth and is a player that would not be sorely missed once he leaves the club, United will then be able to bring in someone from the youth academy to develop.

Following the departure of Jose Mourinho and the short-term arrival of Ole Gunnar Solskjaer, Marouane Fellaini has become one of the few players that does not fit the current coach’s style of play and has also been hit with a few unfortunate injury issues. Not only that, he has hardly been regarded as a player that represents Manchester United as a whole and what they proudly stand for.

For sure, he is not athletic, intelligent or proactive enough to be seen as a regular starter or even as an option from the bench, but he did come up with the vital goals for when the side needed him the most during the Louis Van Gaal and Jose Mourinho era. Now, that the club are returning onto the right path, the attributes and services that Marouane Fellaini provides is no longer required at Old Trafford.

Since completing his monumental move from Serie A to the Premier League in the summer of 2015, Matteo Darmian has shown his impressive versatility to play as a left-back, right-back and centre-back when required. On the other hand, he has failed to adapt to the physicality of the Premier League as well as the wingers that are filled with pace and trickery, which has led to him falling behind the likes of Antonio Valencia, Ashley Young and now Diogo Dalot for the right-back position.

The Italian international has only completed five league appearances so far this season, seriously implying that he wasn’t in Jose Mourinho’s plans and he isn’t seen as a player to be utilised by Solskjaer himself. With Serie A clubs in Inter Milan, Juventus and Napoli reportedly being interested in the full-back, it would only make sense for the club and the player to part ways in the summer.

With another round of Premier League action done and dusted, it’s time to take a look at which midfielders excelled and which ones were left eating their dust.

END_OF_DOCUMENT_TOKEN_TO_BE_REPLACED

Manchester United are reportedly close to signing Torino defender Matteo Darmian this summer for around £13M, with manager Louis van Gaal planning to make him his first-choice right-back for the new campaign. The 25-year-old isn’t too well known outside of Italy, but he has been making waves for his side in the last couple of seasons.

Darmian has shone in the Europa League over the past 12 months for the Italians, and he represented his country in the 2014 World Cup and a host of following friendlies. He’s highly-rated in the Serie A, let alone with his side Torino, with president Urban Cairo having said of the speculation: “Offers have arrived. Darmian is an extraordinary player who will want to try and win the Champions League one day.”

His career started at AC Milan, but he failed to make a name for himself with the Rossoneri. Darmian was a late bloomer in regard to hid development, with spells at Palermo and Padova (loan) not seeing him showcase his true potential. It wasn’t until his 2011 move to Torino that the 25-year-old came into his own, and he hasn’t looked back since.

Last season, the Italian right-back made 33 Serie A appearances for Torino, scoring and creating three goals, while averaging a tackle or interception every 21 minutes. Darmian created 39 chances and made 27 successful dribbles too. He’s been identified as Van Gaal as the perfect candidate to replace Rafael da Silva and Antonio Valencia at right-back for the long-term, but is attracting interest from others.

A versatile player, Darmian can play in any position across the back-four, and has operated in every position in midfield too, so he’s a useful utility star if needs be. And are £13M, he’s not breaking the bank for Manchester United. He’s not the big-name supporters were expecting when the likes of Daniel Alves (Barcelona) and Nathaniel Clyne (Southampton) were linked with the Red Devils, but he is a talented defender who will ensure he nullifies the threat of the opposition.

Described as a optionally-aware full back with excessive pace, it’s clear the Manchester United boss wants his defence shored up for the new season, and Darmian could be the man to help. He provides an outlet on the right-hand side when attacking, but can also stop his man in one-on-one situations – something Valencia failed to do last season as he wasn’t a natural fullback. And with Rafael courting interest, his sale could go towards funding this potential transfer.