France secured their second World Cup title by defeating a typically spirited and fiercely competitive Croatia 4-2, in a captivating clash in Moscow. END_OF_DOCUMENT_TOKEN_TO_BE_REPLACED

France head into the World Cup final vs. Croatia full of confidence and in fine fettle, as they look to atone for their Euro 2016 loss that occurred almost exactly two years ago. END_OF_DOCUMENT_TOKEN_TO_BE_REPLACED

After having won four out of their five matches at this year’s World Cup, including being among the very few to win all their group games, Belgium exited the semifinals with a commendable performance. With the likes of Eden Hazard and Romelu Lukaku leading the Belgian attack, the two have been instrumental in guiding their nation to the semifinals for the first time since 1986.

We previously examined Hazard and the Belgian team’s progress on Euro Fantasy League and discussed their prospects on reaching the final. Unfortunately, it wasn’t to be and they were narrowly edged out 1-0 against France. However, after Belgium’s third place match against England, Hazard will be contemplating his next club move.

His obvious choice will be to Spanish giants Real Madrid. After recently losing Ronaldo to Juventus, Madrid will undoubtedly be looking at a few big names, with Hazard as a favorite, to replace their Portuguese star. The latest news is that Barcelona have also indicated their intention to sign Hazard. A fight between the two Spanish giants over the Belgian could be on the cards. Yet, in an interview about his future with Chelsea, Hazard suggested it will depend on which players Chelsea signs for next season. 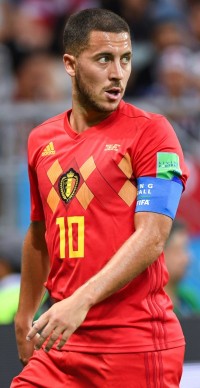 The 27-year-old is considering his options carefully, aware that his next contract will probably be one of the last he signs while in his prime. For now, he is a sought-after superstar. His past six years in the English Premier League have been exemplary and he has been an extraordinary presence at Stamford Bridge.

So much so, that in 2016 he was nominated along with Marco Reus, James Rodriguez and Anthony Martial to be the face of the popular FIFA 17 game. EA Sport’s senior producer Nick Channon told the Independent that Hazard, along with the other three superstars, represent exciting, attacking football and expressed his excitement at the prospect of global fans voting on the face which would represent the FIFA franchise globally.

Since the FIFA franchise’s inception in 1994 there has been an influx of soccer games vying to tap into the lucrative gaming market. Digital platform Foxy Bingo is well known for releasing sports themed slots that look to tap into soccer’s global fanbase. Their ‘Striker Goes Wild’ game is designed to target soccer’s online mobile gaming community and fans of the beautiful game. This only goes to show how wide reaching the market is for soccer fans who enjoy the sport on digital platforms; it demonstrates why the announcement of the next FIFA cover star is considered one of the biggest events in sports gaming, and what it says about the star who becomes the latest face of the game.

While Hazard was not chosen for the FIFA 17 cover (Marco Reus was), his popularity has not waned. Still in his prime, he remains a sought-after name with Chelsea officials offering a new contract worth over $400,000 per week, to persuade him to stay. With the World Cup behind him, and the world at his feet, Hazard’s career will reach greater heights no matter where he goes, or doesn’t for that matter.

With the World Cup now all but done and dusted and in the history books, time to take a look at how things are standing in this year’s Golden Boot race. The Golden Boot is, of course, awarded to the player who has scored the most goals in the tournament proper, and has historically been won by some legendary players in football. Brazilian Ronaldo won it in 2002, for example, while the last English player to do so was Gary Lineker in 1986. This time around another Englishman is in the running – and no prizes for guessing which one! Harry Kane had a wonderful start to the campaign, and has netted six goals on England’s path to the semi-finals where they would eventually bow out to a superior Croatia side.

END_OF_DOCUMENT_TOKEN_TO_BE_REPLACED

When Croatia and England were set up to meet in this summer’s second World Cup semi-final, both teams sensed a real opportunity to progress to the final. Either qualifying was always going to be a fantastic achievement, with Croatia having never reached a World Cup final and England having only done so once, 52 years ago. The English media, full of praise for the team for the first tournament in decades, fancied their chances against Zlatko Dalic’s men, while the latter saw a real opportunity to progress to the last match against France. Whatever was going to happen, this was a match being played by two nations incredibly proud of their teams.

END_OF_DOCUMENT_TOKEN_TO_BE_REPLACED

When England crashed out of the 2018 World Cup at the semi-final stage, losing 2-1 to Croatia after extra time, a nation was silenced. The England fans, so vociferous in their support for the Three Lions on the shirt and the 11 heroic ones on the pitch, were left gutted. For this one glimmering summer, the optimism seemingly extinguished long ago started to flicker back into existence. Football was coming home, they thought. But it didn’t. However, instead of the usual what-ifs and why-didn’t-theys, this time the team left with their heads held high, falling against a side who, once they grew into the match, were simply the better team on the night.

END_OF_DOCUMENT_TOKEN_TO_BE_REPLACED

France have booked their place in the first World Cup final in 12 years at this summer’s tournament. They overcame a talented Belgium side 1-0 to move to within 90 minutes of regaining the status of world champions. In Sunday’s Final they will come up against the winner of the other semi-final, contested between England and Croatia, and whichever side gets through to the biggest match in world football the French will go in as favourites – but needing star striker Antoine Griezmann to be on top form. Griezmann’s World Cup campaign so far has of course been decent – he has bagged three goals for himself while partnering arguably one of the stars of the show, Kylian Mbappe, through the youngster’s first senior international tournament.

END_OF_DOCUMENT_TOKEN_TO_BE_REPLACED 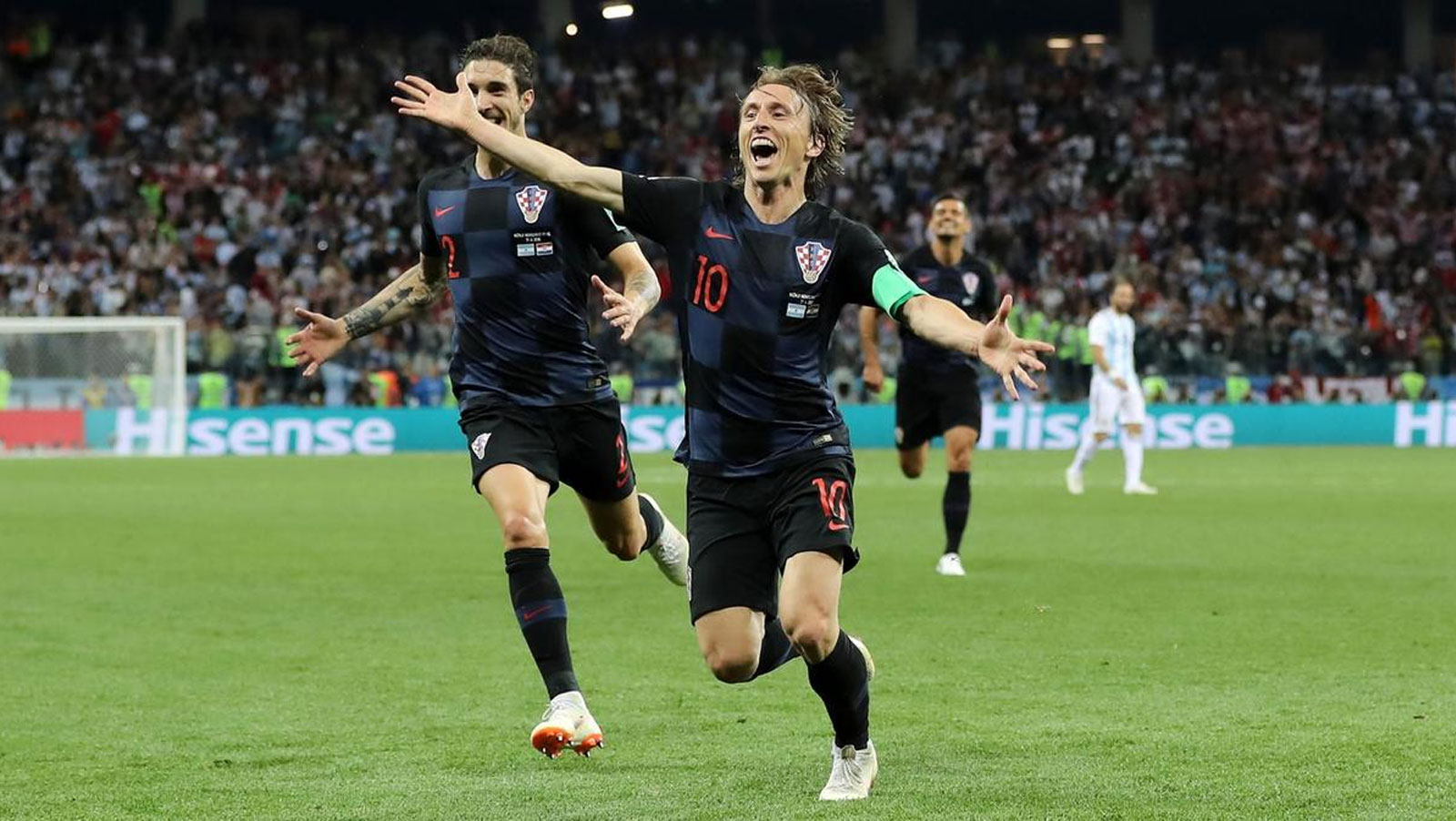 England stand on the brink of a first World Cup final since 1966 as they prepare to face Croatia tonight – and the Croatians face the prospect of a first ever appearance in the biggest game in world football.

Both sides have endured frustrating performances in recent World Cups, despite having talented squads available to them, with England only reaching one World Cup semi final since 1966 – in 1990, and Croatia only reaching this stage once before – in 1998.

This is uncharted territory for both nations, their fans and most definitely their players.

END_OF_DOCUMENT_TOKEN_TO_BE_REPLACED

As you will probably already know, Juventus have confirmed one of their biggest transfer deals since the likes of Gianluigi Buffon and Pavel Nedved signed for the Turin club back in 2001. They confirmed that Real Madrid’s Portuguese star Cristiano Ronaldo would be wearing the black and white stripes of the Old Lady next season, signing a four-year contract for a fee of around €105M. The deal ends his nine-year stay at the Bernabeu, where he moved from Manchester United in 2009 for a then-world record transfer fee of €94M. His time at Real was laden with glory, though he surprisingly only managed two La Liga titles. 15 trophies were won in total though, including four Champions League crowns, and now he turns the page on a new chapter in his career.

END_OF_DOCUMENT_TOKEN_TO_BE_REPLACED

In the end France got there with a lot to spare. At the end of a 1-0 win over Belgium in St. Petersburg France have the chance to be world champions for only the second time in their history. The betting odds for France are looking good too, with them currently being at 4/6 to win. There’s a great deal of markets on at the moment and if you’re going to be putting your money on France, you may want to check out Top Football Tipster’s tips first to help you make a profit. You should also look at a few different betting sites to see who has the best offers on. But how are France looking after Tuesday’s semi final?

The scoreline may have indicated a tight and tense affair but in the end Didier Deschamps’ side held their opponents at a reasonable distance, Belgium failing to create anything of note as the minutes ticked away. This was as efficient and professional as a World Cup semifinal gets. Yet it seems odd that a team of such attacking talent is described in such terms.

France’s attacking lineup is as good as it gets at this World Cup: Kylian Mbappé, Antoine Griezmann, Olivier Giroud and Paul Pogba and so much more. But they’re only ever seen in bits and pieces, flashes of inspired showing. It was Mbappé speeding past Jan Vertonghen in the first ten seconds like he didn’t exist; Pogba’s feint of body in the centre circle to leave Mousa Dembele in his wake and send Mbappé on his way with a through ball. Save for the seesaw game against Argentina in the Round of 16, which feels like ages ago, France aren’t in the final because of those moments of brilliance but for what they do best when the pressure is on.

France defend expertly well as a unit, marshalled by the relatively young but experienced duo of Real Madrid’s Raphael Varane and Barcelona’s Samuel Umtiti, who scored the winner here. When Thibaut Courtois complained of France being ‘anti-foootball’ in the aftermath of this game, perhaps he thought he had a point but instead he was spectacularly missing it. Deschamps, roundly criticised by many, isn’t interested in winning neutral hearts and plaudits, he simply wants to fashion a team that can win. The football may not be aesthetically pleasing to the purists but whatever argument or grouse pales in significance when set a cogent fact: France are in the final and are one win away from being champions.

Watching this France team can be a testing experience, a 90-minute show of complaining why a team that could potentially give more is playing within itself. Yet France have won all three knockout games with relative ease, all within 90 minutes, and they give the impression they play in the third or fourth gear. If you reach the final game of the world’s greatest sporting showpiece without necessarily being your best, the indictment is on the rest of the competition for failing to ask uncomfortable questions. France as a team have done their bit to win the World Cup, and should they be crowned on Sunday, they will be worthy winners regardless of questions over style or aesthetics.