There was no stopping Real Madrid after the resumption of the Spanish football season. Indeed, Zinedine Zidane’s side won 10 straight games following lockdown to take control of the title race at the top of La Liga. Los Blancos head into the summer as Spanish champions for only the second time in the last eight years.

But for all the success Real Madrid have enjoyed this season in wrestling back the Spanish title from Barcelona, this is a group of players that still finds itself in the midst of a generational transition. The likes of Toni Kroos, Luka Modric and even Sergio Ramos will have to be phased out of the Real Madrid starting lineup over the next few years and so there is no time for Los Blancos to rest on their laurels.

Reports claim Real Madrid will have to sell players before they can buy anyone this summer. There is fortunately, for their sake, a lot of deadwood for them to shift. James Rodriguez, for instance, is now seen as surplus to requirements at the Santiago Bernabeu. The Colombian has struggled for game time this season and has been linked with a move to the Premier League.

Mariano Diaz is another who could be moved on, with the striker barely featuring for Real Madrid this season. Then there’s Gareth Bale, the Welsh winger who become something of a sideshow with his antics in the stands as Los Blancos marched their way to the Spanish title. If Real Madrid could find a buyer for Bale, significant funds could be freed up for new signings.

But selling these players in this depressed transfer market is going to be tough. Clubs are being more creative in the way they are strengthening this summer and so this might make it more difficult to sell their players in orthodox transfer deals. They might have to enter the loans and free agents market like everyone else if they want to reinforce their squad ahead of next season.

Zinedine Zidane knows how to get the most out of a squad. The Frenchman returned to the Santiago Bernabeu last year and was handed a Real Madrid team lacking in identity, direction and confidence and in just over 12 months he turned them into Spanish champions. Zidane proved his worth as a coach and a manager this season.

Indeed, by revitalising the likes of Karim Benzema, Toni Kroos, Luka Modric and Sergio Ramos, Zidane was able to squeeze more out of a squad most had assumed was past its expiry date. Of course, a generational transition will still need to happen at Real Madrid, but for the time being their current team is delivering.

And yet there is still some deadwood weighing them down. With the summer transfer window set to open soon, it’s highly likely Real Madrid will have to move on some players before they can buy anyone. It could be a frustrating window for Los Blancos if they are unable to find buyers for players they don’t need.

James Rodriguez is almost certain to leave the Santiago Bernabeu this summer. The Colombian was recalled by Zidane last summer having failed to earn a permanent move to Bayern Munich after a loan spell there, suggesting that he would be used by Real Madrid. Barring a few sporadic appearances, though, James has been a peripheral figure.

A move to the Premier League has been mooted, with Arsenal and Manchester United among those interested, but offloading James in this economic climate might prove difficult. Dani Ceballos is another whose future at the Santiago Bernabeu is far from certain. The midfielder has impressed at times on loan at Arsenal this season, but is expected to return to his parent club once that loan agreement has expired.

Then there’s Mariano Diaz and Brahim Diaz, both of whom have played a bit part role for Real Madrid this season. But Real Madrid’s biggest chunk of deadwood is undoubtedly Gareth Bale. The Welshman is still the club’s highest paid player, but has barely featured for Los Blancos since the restart of the season.

Real Madrid tried to move Bale on last summer, with the winger coming close to a switch to a Chinese Super League, but there is no suggestion that he will leave the club in this window. That means a significant chunk of cash remains tied up at the Santiago Bernabeu, making it much tougher for Real Madrid to get anyone in this summer.

As far as underwhelming replacements go, Real Madrid’s signing of Mariano Diaz as their number seven following the sale of Cristiano Ronaldo was right up there with Manchester United handing Michael Owen the same number after the exit of the Portuguese forward nine years previously.

Of course, Mariano was never really meant to replace Ronaldo. He wasn’t even meant to be a first team figure upon his return to the Santiago Bernabeu just one year after leaving for Lyon. The Spaniard was signed to ease Real Madrid’s dependence on Karim Benzema and to provide the Frenchman with some competition for his place. 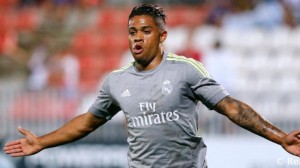 There were good reasons to believe Mariano could do this. He’d just enjoyed a highly successful season with Lyon, proving to many that he could handle the pressures of playing first team football. Opportunities, however, were few and far between for Mariano last season, with the striker now reportedly on his way out of Real Madrid again.

Arsenal have been mentioned as potential suitors. A loan to another Spanish Liga club has also been mooted. Either way, it seems likely that Mariano will once again leave Real Madrid by the close of the summer transfer window. Zinedine Zidane, it seems, has made his mind up on the player.

Real Madrid might regret allowing Mariano to leave… again. They might have splurged a lot of money on signing Luka Jovic from Eintracht Frankfurt, they might still have Benzema and now Eden Hazard to provide additional goal threat from the wings, but depth will still be required in the attacking third, especially if players are to leave the Santiago Bernabeu between now and the start of the new season.

Marco Asensio, Isco, Lucas Vazquez and Gareth Bale could all be sold this summer, with Real Madrid keen to get rid of some of their deadwood. This is necessary, but cutting away too much could leave them thin in the attacking ranks. Mariano could be one of the players worth keeping around.

Look at the options Barcelona have across the frontline. They have Lionel Messi, Luis Suarez, Ousmane Dembele and Malcom. On top of this, the Catalans are expected to complete deals for both Antoine Griezmann and Neymar this summer, giving them the strongest attack, not just in Spain, but in Europe.

Real Madrid are in the midst of a squad overhaul. Players have already come and gone and there will be more change before the close of the transfer window. Mariano will likely find himself caught up in this, but Real Madrid should consider whether allowing the striker to leave might see them repeat a mistake.

It was a weekend in La Liga where Barcelona lost only their 3rd game of the season as coach Ernesto Valverde rightly rested the majority of his team ahead of the clubs 2nd leg semi final Champions League match against Liverpool. Barcelona have already won the league and Celta Vigo defeated the club 2-0 which in turn boosted their survival hopes for this season.

Atletico Madrid also lost but they will finish in 2nd place as Real Madrid will not be able to catch them. The real amazing story to emerge from Spain is Getafe who are still on course to finish in the top 4 and make the Champions League. Below we take a look at the best 11 players from this past weekend in La Liga- were they in your team?

A few goalkeepers picked up 7 points but a lot of credit needs to go to Celta Vigo’s Ruben Blanco who was able to keep a clean sheet against the mighty Barcelona. Barca did not play their strongest team but even their second string is good enough for a top  4 place and Blanco did very well as his club won 2-0.

Getafe kept up their top 4 hopes and Champions League qualification dreams by beating Girona 2-0 at home. Foulquier assisted in the first goal and was part of a strong defence that also kept a clean sheet to earn 7 points. The player is valued at just 3.5m and is 11th in the rankings for defenders.

Jose Angel has just 25 points this season but 8 have been earned this past weekend as Eibar earned a 1-0 win against Real Betis. It was the clubs 2nd successive clean sheet of the season.

Damian Suarez is part of Getafe’s defence who did so well to help his team keep yet another clean sheet and give them a 3 point gap to their rivals. It was a fantastic display. Suarez has earned 46 points this season and is valued at 7.5m.

Another Getafe defender, Bruno was amongst the best and earned 6 points this past weekend. He has 41 points and is valued at 6m and was simply a rock in defence.

What a weekend for Jose Campana who earned 7 points but it could have been much more as his team won 4-1. He opened the scoring and assisted in 2 more goals, but failure for a clean sheet and then getting booked brought down his points. Still one of the players of the weekend in La Liga.

Incredibly the midfielders of the league did not score many points to get into this team. Bardhi highlights this case with just 4 points earned as Levante won 4-1 at the weekend. Bardhi scored the fourth and last goal of his clubs vital victory and he can be bought for 7.5m.

Veteran player Ryad Boudebouz was able to celebrate a very rare victory over Barcelona as Celta Vigo beat the champions. Boudebouz assisted in the opening goal and from there on in there was only ever going to be one winner. The player has amassed 18 points this season from 12 starts.

Gonzalo Melero earned 4 points this past weekend as Huesca were destroyed at home 6-2 against Valencia. The only bright moment for the player is that he came off the bench and within minutes had scored for his club to give the home fans something to cheer about. Melero is valued at 6m.

Santi Mina was a sheer delight at the weekend and picked up a brilliant 12 points as Valencia beat bottom club Huesca 6-2 away from home. Mina scored 2 and then assisted in 2 and had pretty much the perfect game. Mina is valued at 7m and has scored 6 times this season, but recent form has been devastating.

The 25 year old Mariano started just his 5th game for Real Madrid as they beat Villarreal 3-2 and the player justified his selection by Zinedine Zidane by scoring two goals and helping Real to all three points. He is valued at 9m.