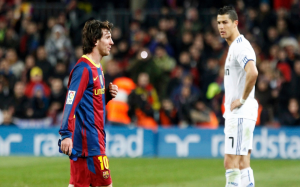 Messi versus Ronaldo…  Benzema versus Neymar… Rodriguez versus Suarez… Wow! This Saturday will give us a matchup of superstars. Forget all the other matches. This is the one to watch and cherish.

Why is this match so important? Because, for one thing, it will surely reward us with a number of beautiful goals. That’s to be expected. But it’s really the chess moves that both clubs are going to have to make to win that will be most intriguing. Neither manager wants to lose this game and neither wants to be criticized for starting the wrong players.

Barca, on the one hand, has to take into account the addition of Luis Suarez who, after a 4 months suspension for practicing his biting technique, will make his debut tomorrow. Will he be a starter? Surely, yes. But what happens if he doesn’t mesh immediately with Messi and Neymar? Will he be benched? If Barca loses, will he be blamed or will Luis Enrique for starting him or for benching him too early or for playing him too many minutes? If Lionel Messi underperforms, will he blamed for folding in front of his nemesis, Cristiano Ronaldo, who is playing second to none this season?

Real Madrid, on the other hand, will have to deal with the loss of Gareth Bale but will otherwise have all of the remaining pieces intact. But how will they counteract the addition of Suarez? If he plays well and manages to spread the field with Neymar and Messi, how will Carlo Ancelotti react? If Barca scores quickly, will Real be deflated?

In the end, this is a matchup between some of the world’s best players with great talents but also between managers with even greater egos.

So, who will you choose to pick up for the match? Ronaldo leads the pack with 340 points but costs 23.5m. Messi costs the same but has earned only 200 points so far. However, he may want to prove himself. Of course, you can pick up both but will need to manage the rest of your team to stay under your 100m budget. Benzema earned 50 of his 85 points in the past two matches. Neymar has been on fire of late after a slow start to the season. He has 175 total points. James Rodriguez has been consistent, gaining points in his last 5 matches for a total of 105. He is also a good value at 9.5m. Of course, you could risk starting Suarez. Don’t forget to make your player transfers (adds/drops) before the match starts on October 25th at 16:00 UTC.