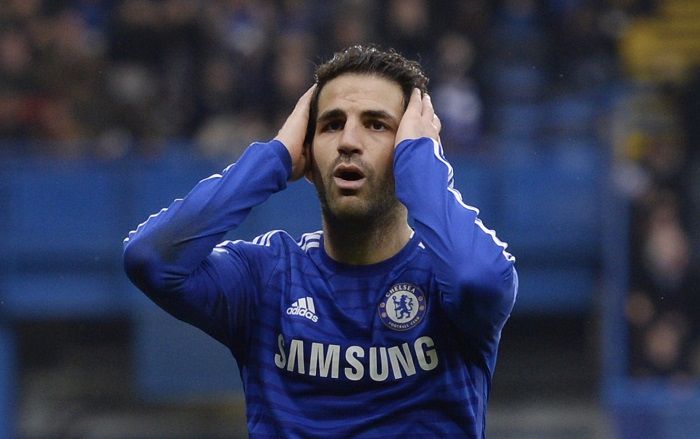 Chelsea midfielder Cesc Fabregas has endured a season to forget. The Spanish international has struggled for form with the Blues, and has found himself the recipient of ire fom the supporters due to rumours about his involvement of the sacking of former manager Jose Mourinho. While further reports suggests the ex-Barcelona man was in fact an ally for the Portugese coach, his form certainly didn’t help matters, and it would hardly be surprising  if he seeked greener pastures elsewhere in January.

While Guus Hiddink’s arrival means a clean slate for Fabregas, the 28-year-old could well take matters into his own hands if the rumours linking him to the Serie A are true. Italian giants Inter Milan and Juventus are reportedly keen on the playmaker, and the slower style of play could well suit the tiring midfielder, who has struggled with the fast pace of the Premier Leauge since winning the title. Fabregas has suffered burnout in 2015, and such was the reason his return to Barcelona didn’t go as planned in the long-term.

Many past-their-peak footballs had made the switch to the Italian Serie A due the slower paces style being easier to contend with, and a talented passer of the ball like Fabregas could certainly shine. He’s not at his best when having to chase down the opposition, but instead when he’s controlling possession with a like-minded midfield alongside him. He wouldn’t break the bank either given his poor form this year, and Chelsea could be considering letting him and many others go to rebuild with a youthful eye.

Fabregas is one of many players currently in the latter years of their career and players underperforming for the Blues this season. The Spaniard has struggled the entire year, and it would be hard to see Chelsea turning down a fair offer for the 28-year-old when the January transfer window opens. The Londoners have been heavily criticised for ignoring the up-and-coming talents at the club, while loaning out so many players rather than utilising them, and a Fabregas replacement could be in the youth side now.

Prior to his move to Chelsea, Arsenal were linked with the midfielder, with Cesc having played for the latter between 2003-2011, but opted against bringing him back. Manager Arsene Wenger felt he was no better than what he already had, and he has so far been proven right. With Fabregas short of form and being linked with clubs that would allow him to operate in his perferred playmaker role, rumours won’t die down of a possible move in January, so could he leave Chelsea this season?