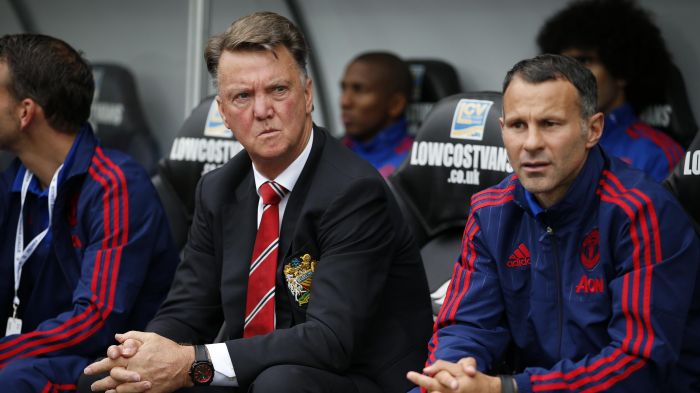 A number of Manchester United supporters are campaigning for club legend and current assistant manager Ryan Giggs to take charge of the club should manager Louis van Gaal be sacked, citing his knowledge of the club’s history, success as a player and cache in the game as a whole. But given the Welshman has known little other than United’s demise during his foray into coaching, what has he really learned from shadowing the manager that would suggest he would make a good successor?

Giggs was a senior coaching figure during David Moyes’ stint as United manager, taking the reigns full time for the final selection of games. He has been assistant to Louis van Gaal ever since, and the future plan appears to be for the 42-year-old to be a long-term boss at Old Trafford when the time is right. However, Giggs’ experience learning the ropes hasn’t been a pleasant one, and it seems far too early to be considering the long-serving midfielder for the top job at United.

Nevertheless, the rumour mill has been in full force, and even pundits are suggesting Giggs is having a positive influence on the side that could suggest top-level management might be coming his way soon enough. After Manchester United drew with Chelsea in the Premier League after a rare dominant display that deserve more, Sky Sports pundit Jamie Carragher suggested the Welshman’s tactics were on display due to the change in style from Van Gaal.

“If I hadn’t read a paper or watched television in the last 48 hours, I’d have thought it was Ryan Giggs’s first game in charge,” he said. “I’m not saying he was responsible for tactics but this was not a typical Louis van Gaal performance from Manchester United. This looked like the team of old with the way they attacked and pressed. It would have been a travesty had Chelsea snatched a winning goal.”

Giggs was most prevalent during the glory days of endless title triumphs and European success under Sir Alex Ferguson – one of the game’s greatest ever managers – playing a fast-paced attacking style of football that more than entertained the supporters. Van Gaal has favoured a slow and patient approach, so the change in style was very noticeable. Aside from links to the United job, Giggs was linked with the vacant Swansea position a number of weeks ago, and there seems to be a following that tip his for a bright coaching career.

In Moyes’ tenure, United set unwanted records for defeats in a league season and losses at Old Trafford to clubs that normally wouldn’t leave United’s backyard with a point. Giggs hardly picked up much as a coach except how not to go about his own approach. It’s been a similar situation with Van Gaal, although the Dutchman is far more stubborn about his style, so it’s hard to see how Giggs has much of an influence.

He’s held in high regard with the club hierarchy neverthelesss, and seems to fit the bill for what United want as their long-term manager in the future, but what has he really learned in the last two years?