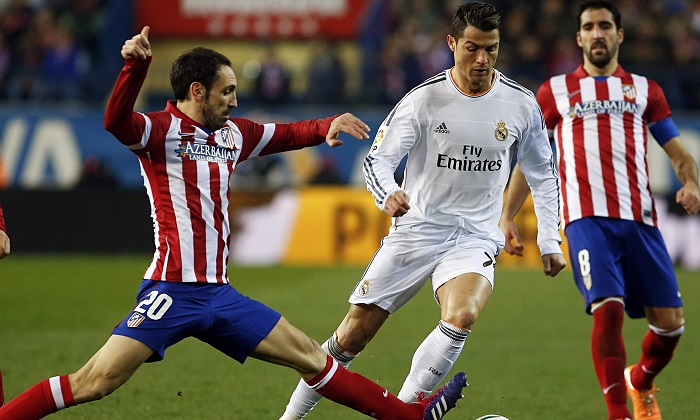 Real Madrid welcome fierce rivals Atletico Madrid to the Santiago Bernabeu on Saturday afternoon, with the two sides desperate for a win to try and make up the deficit on league leaders Barcelona. The visitors have 55 points from 25 games, while Real are one point adrift in third, but this weekend’s clash could well go the way of the travellers given their form on the road and in the El Derbi madrileño.

Both sides are in good form ahead of Saturday’s meeting, but Atletico Madrid boast the best away form in the league and have been dominant in this fixture for the last three years. Real haven’t beaten their rivals in La Liga since April 2013, and they haven’t even picked up a point in their own backyard to Atleti since.

Diego Simeone’s men boast three wins and two draws from their last five league meetings with Los Blancos, and have relished away games this season. No side have picked up as many points on the road as Atleti this season, and their outstanding defensive record will also see Real somewhat fearful given their poor record in this fixture of late.

Victory for the visitors could see them going four points clear of their rivals with 12 games to go, and potentially cutting the deficit to Barcelona to five points. Real are no slouches, however. Zinedine Zidane’s men have been in fantastic form ahead of the derby game, boasting seven wins and three draws from their last 10 league outings.

They’re immediately coming off the back of a 2-0 win to AS Roma in the Champions League too so they can’t wish for better preparations ahead of such an important clash. They’ll have Karim Benzema back too, and his form this season could be the difference in a difficult game to come. Atleti are known for their physicality and indiscipline in such ties, so Real need to avoid engaging if they are to come out on top.

Victory for Zidane would elevate his name among the supporters, and could see him in line to keep his job past the summer. However, Atletico are masters at disrupting a side’s momentum, and they have a strong side available to play against their rivals. Zidane is under no illusions of their threat at the Santiago Bernabeu, hailing Simeone’s work at the club in the last few years, but what will the outcome be this weekend? Will Atleti continue their dominance over Los Blancos?