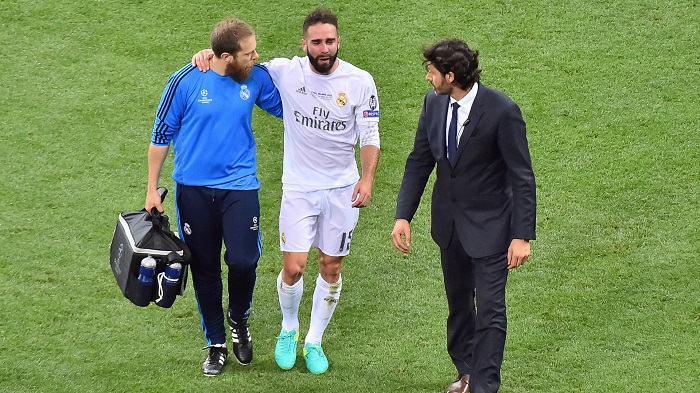 Real Madrid defender Dani Carvajal has revealed he will miss this summer’s European Championships after picking up a leg injury. The Spanish right-back limped off in Real’s Champions League final victory over Atletico Madrid in tears, and has confirmed that his muscle injury will rule him out of representing the national team as they bid to retain their European crown.

“I got injured and the only thing I can do is to wish my team-mates the best of luck. I feel a lot of contained rage. I fought for two years to try to make the group and I am disappointed with myself for the bad luck I’ve had. I’ve worked so hard to be in the preliminary squad and now look what has happened,” he said.

The 24-year-old started in the final, but was forced to come off minutes into the second-half. He later revealed he’d been fighting for a number of weeks with the niggle. “For two weeks I had some slight pain while I was preparing for the final. I felt a pain and I was able to hold on until half-time. When the second half started, I couldn’t continue any more. I had to leave and I knew there and then that I would probably miss Euro 2016,” Carvajal added.

It’s a big blow for the Real Madrid man as he was enjoying a real resurgence under manager Zinedine Zidane, and now won’t be able to fight for a starting place in the Spain squad. Arsenal’s Hector Bellerin is expected to replace him, according to national team manager Vincente Del Bosque, but Carvajal’s absence is a major blow given the form he was showcasing in La Liga.

Having made 22 appearances for Real Madrid this season, the academy graduate has given some real stability to the defence, while showcasing a threat in the final third too. Carvajal created 30 chances for Real in 2015/16, and would have provided the width in the Spain side when their forwards occupy central positions.

Dani Carvajal has made only a handful of caps for the Spain squad, but had progressed impressively after being axed from the 2014 World Cup roster. However, fortune has not favoured the Real Madrid man, and now he’ll be forced to cheer on the Spaniards from the sidelines. Chelsea’s Cesar Azpilicueta and potentially Bellerin will be fighting it out for the right-back slot in Euro 2016. Carvajal will feel he stood a chance to dethrone the former had he been fit.