There’s been an awful lot going on at the Camp Nou just lately, with the Lionel Messi situation and the vote of no confidence for president, Josep Maria Bartomeu and his board hogging the headlines.

Everywhere you turn there’s something else for Barca’s long-suffering supporters to get hot under the collar about.

However, there’s one player that’s kept his own counsel. END_OF_DOCUMENT_TOKEN_TO_BE_REPLACED

When Ousmane Dembele signed for Barcelona from Borussia Dortmund, it seemed to be a huge statement from the Catalans that they were still going places.

Although his €100m+ fee was considered steep, Dortmund were very firm in their negotiations. Pay up or he stays.

The player himself eventually went on strike to force through the move, and that hinted at the type of character the Blaugranes were getting. END_OF_DOCUMENT_TOKEN_TO_BE_REPLACED

As we hurtle towards the end of another gruelling La Liga campaign, Barcelona will already be looking towards a successful 2019/20 season, and to that end Eric Abidal will need to do some wheeler-dealing in the transfer market.

With Matthijs De Ligt just one name being mentioned as a possible new signing, it’s clear that the Catalans will have plenty to do across the summer.

The futures of most of their players remain crystal clear, but there are question marks too. END_OF_DOCUMENT_TOKEN_TO_BE_REPLACED 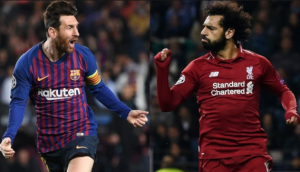 The Reds have history on their side too, as the Catalans have never beaten them over two legs in European competition. END_OF_DOCUMENT_TOKEN_TO_BE_REPLACED

There was a time, not so long ago, when Barcelona’s demanding fanbase couldn’t have cared less if Ousmane Dembele was sold or not.

Incessant newspaper headlines relating to poor timekeeping, a lackadaisical attitude and little effort being shown in training or in matches, meant that if his Barca career wasn’t hanging by a thread, then it wasn’t too far off.

END_OF_DOCUMENT_TOKEN_TO_BE_REPLACED

There was a 50 percent chance of it happening, and once Valencia and Real Betis had been drawn out of the Copa del Rey hat, it meant that, yes, we were going to see a two-legged El Clasico semi-final.

Moreover, the second leg at the Santiago Bernabeu precedes a league match between the two teams at the same venue just 72 hours later.

It’s the first time in Barcelona’s history that they will have played two consecutive games at the Bernabeu, and given their recent record there, the Blaugrana will be entirely confident of continuing their run of victories. END_OF_DOCUMENT_TOKEN_TO_BE_REPLACED

Against Getafe on Sunday night, Barcelona’s record signing, Phillipe Coutinho, was again left on the bench.

That’s right, €160 million worth of talent being given a cursory eight-minute cameo at the end of the match.

Predictably it wasn’t enough time for the Brazilian to really make an impact, and that is becoming a consistent theme for him of late. END_OF_DOCUMENT_TOKEN_TO_BE_REPLACED

There are just another few weeks remaining until the transfer window is open for business once again.

Noises have already been made from various players and clubs, some more subtle than others it must be said.

Most of the spadework on deals will have been done prior to January 1, 2019, with the nuts and bolts of any switch to be ironed out in good time after that date. END_OF_DOCUMENT_TOKEN_TO_BE_REPLACED

Not too long ago, Barcelona’s Pep Segura made a simple statement that could be easily understood and with no room for misinterpretation.

Any player that leaves the club is not welcome back.

An understandable point of view, particularly when it relates to one of the biggest names in world football. END_OF_DOCUMENT_TOKEN_TO_BE_REPLACED