Last summer’s transfer window saw Real Madrid spend more than any side in Europe. Indeed, the Spanish giants went big as they added Eden Hazard, Luka Jovic, Ferland Mendy, Eder Militao, Rodrygo and Alphonse Areola all making the move to the Santiago Bernabeu. Not every signing was a ‘Galactico,’ but it did underline the club’s bullish approach to recruitment.

Now the transfer window is just days away from opening again. January will present Real Madrid the chance to reinforce their squad and as is always the case a number of players have been linked with a move to the Spanish capital. It wouldn’t be a transfer window without much speculation around Real Madrid.

There will be more conjecture around their long-standing interest in Paul Pogba. Zinedine Zidane was desperate for the French midfielder to be signed in the summer only for Manchester United to dig their heels in. Pogba has barely played this season due to injury and the suggestion is that he still wants a move away from Old Trafford.

However, prising Pogba from Man Utd’s grips midway through the season when they are already short of midfielders will be difficult and so Real Madrid might be forced to wait until the end of the season to get their man. With that in mind, who should they target in this upcoming transfer window?

Boubakary Soumare is reportedly on Real Madrid’s radar. The Lille midfielder would be a shrewd addition given his qualities as a midfielder. Standing at 6ft 2″, he possesses the physical attributes of Pogba, but has the work rate and modesty of someone like N’Golo Kante. He would be a popular figure at the Santiago Bernabeu.

Real Madrid’s midfield isn’t in such desperate need of reinforcement, though, following the emergence of Fede Valverde and rejuvenation of Toni Kroos and Luka Modric. Instead, it’s in attack where they could use a deputy to Karim Benzema. Jovic was supposed to be that figure, but the Serbian has struggled to acclimatise to his new surroundings.

Benzema is enjoying the season of his life, but Real Madrid have become a little too dependent on the French striker of late. When he’s missing, or even when he’s not in top form, they struggle to get results. This was evident in the recent draws against Valencia, Barcelona and Athletic Club. If Real Madrid are to target new signings this January, this is where they could use them most.

END_OF_DOCUMENT_TOKEN_TO_BE_REPLACED

Paul Pogba is back! Most chances created against Bournemouth, tracking back to make tackles and blocks, breaking into the opponents’ box with the endeavour of club legend Bryan Robson and, with another brace, he’s scoring goals for fun.

So what exactly is going on?

Only a mere matter of weeks ago social media was awash with footage of he and Jose Mourinho arguing in training, the armband was unceremoniously removed and a seat on the bench was the best that life was going to get for United’s £90 million superstar. END_OF_DOCUMENT_TOKEN_TO_BE_REPLACED

The circus definitely arrived in Manchester this week.

If losing to Derby in the Carabao Cup wasn’t embarrassing enough for the United hierarchy, the video footage at training of Jose Mourinho clashing with Paul Pogba took things to an entirely new level.

Training ground tête-à-téte’s are nothing new of course, only this time the cameras were watching and tensions that had been rumoured before – but not confirmed – were laid bare. END_OF_DOCUMENT_TOKEN_TO_BE_REPLACED

News that Barcelona had offered €50 million plus Andre Gomes and Yerry Mina for Paul Pogba was, predictably, met with a firm ‘no’ from Manchester United.

Seen as facetious at best, the bid was a serious one from Barca, and the only reason it would’ve been made is if the Catalans had been given encouragement that the French World Cup winner was available.

The reality is that his agent, Mino Raiola, is playing a game of brinksmanship with manager Jose Mourinho. END_OF_DOCUMENT_TOKEN_TO_BE_REPLACED 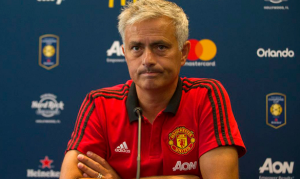 It’s a narrative we’ve seen a few times before. Firstly, at Real Madrid and then in his second spell at Chelsea.

Jose Mourinho looks to be doing the spadework to dig himself out of the Manchester United manager’s job, and if recent history is a guide, a mid-season parting of the ways is almost inevitable.

Not content with seeing his man Paul Pogba lauding it over all and sundry in the World Cup, the Portuguese soured any celebrations for the Frenchman by insisting that the midfielder only ever plays like that for his country.

He employed similar tactics to unsettle players when he was at the Santiago Bernabeu, to the point where Sergio Ramos and Iker Casillas held a summit with president Florentino Perez to tell him “it’s Mourinho or us,” hinting that others would follow suit if the ‘Special One’ was allowed to continue.

Anthony Martial is another in Mourinho’s firing line, the striker castigated for returning home from United’s pre-season tour in America to see the birth of his child.

“We are not a team,” the manager has been quoted as saying whilst on tour. “Pre-season is very bad I have to say that. I’m worried. We’re a group of players from different teams.”

Such negativity from the man in charge can only seep into the psyche of his players, and his demeanour does nothing to enhance the mood in the camp.

Compare his downbeat, morose tone with the positive and joyful Jurgen Klopp. Frankly, there is no comparison at this point.

Liverpool were already enjoying themselves despite losing to Borussia Dortmund, so beating Manchester City won’t necessarily have altered the equilibrium.

Clearly, however, United’s problems go much deeper than a lack of decent preparation before the start of the 2018/19 Premier League campaign.

One might’ve expected the team to be firing on all cylinders now, given that Mourinho has had a good crack at getting United back to where they belong.

He must take part of the blame that they haven’t. After all, it’s not as if the club haven’t backed him because Ed Woodward has done his absolute best to provide his manager with the best tools for the job.

It’s almost as if Mourinho is setting the bar deliberately lower than he should, to ensure that expectations aren’t off the Richter scale before a ball has been kicked in anger.

But surely a club of United’s stature need to be example that everyone else follows?

Perhaps yet another job is just too big for him…

Do you have what it takes to challenge the best Fantasy Managers? If you’re up to challenging the best then play www.fantasy-champions-league.com now!

Possessing an impressive CV at a young age, the Frenchman’s stock continues to rise almost week after week. Despite playing for the best football team in the Italian Serie A, Pogba’s agent is still tipping him for a lucrative move to an elite European club, citing a nine figure valuation.

“I want the club that buys him to believe in him and be willing to pay for him. If Paul leaves Juventus, it is for the absolute top. If you cannot take Cristiano Ronaldo, Lionel Messi or Zlatan Ibrahimovic, you can only go for Paul. If someone wants him, the market situation could see him go for more than 100million Euros,” said the Frenchman’s representative Mino Raiola.

The most expensive central midfielder is Zinedine Zidane, ironically a Frenchman who moved from Juventus to Real Madrid for around £46M. However, such a figure could be comfortably eclipsed by Pogba given his current rise to prominence, should he ever consider leaving the Old Lady.

Pogba has already made 22 caps for his country, and could well have over a decade of service still to offer Les Blues, which could see him challenging the all-time top appearance-maker Lilian Thuram (142 caps). The former Manchester United man is a box-to-box midfielder, more proficient attacking than defending, while possessing quick feet to get himself out of sticky situations, and the strong physique to stand up to big opposition.

He’s dazzled up the Italian Serie A since his arrival, and has played a key role in the Juve side during one of its most successful ever periods in terms of domestic trophies. This season, Pogba has scored six goals in 17 league starts, creating 25 chances and making 58 successful dribbles. The Frenchman has made over 110 appearances for Juve already, with one of his most recent seeing him net the winning goal against Napoli, to earn Juve their first win at the Stadio San Paolo in 14 years.

As a result of his consistent performances in the last two seasons, Pogba isn’t without interest from a host of sides, but his sale will require a large outlay due to his value to the Italian side. Thus, will the 21-year-old become the most expensive central midfielder in history?