Arsenal’s summer transfer strategy was a peculiar one to work out. The Gunners clearly needed an overhaul of their squad, with the departure of Arsene Wenger at the end of last season opening up the opportunity for them to go through with this. And yet few of their signings caught the eye.

The addition of Lucas Torreira was the one exception, though. The Uruguayan became something of a star at the World Cup, showing fans why Arsenal were so keen to sign him for £26.5 million from Sampdoria. He is the type of central midfielder that the Gunners have needed for a long, long time. Torreira has the potential to be Arsenal’s very own N’Golo Kante.

But so far Unai Emery has kept Torreira on the bench. The 22-year-old has yet to make a single start in the Premier League this season, coming on as a substitute in all four of Arsenal’s opening four games of the new campaign. Instead, Emery has favoured a midfield partnership of Matteo Guendouzi and Granit Xhaka, with Aaron Ramsey slightly further up the pitch as more of an attacking midfielder.

Guendouzi is a different sort of midfield operator to Torreira, with the French youngster more of a pass master, a tempo setter. Guendouzi isn’t costing Torreira his place in the Arsenal team, but Xhaka is. As things stand, the Swiss midfielder is ahead of the Gunners’ big summer signing in the pecking order.

Xhaka divides opinion, even among his own fans. The 25-year-old has failed to live up to his billing in his two years since joining Arsenal from Borussia Monchengladbach in the summer of 2016, but every so often there is a glimpse of what he can do. Of why he was once considered one of the best young midfielders in the Bundesliga.

Emery, it would seem, is a fan of Xhaka. But by picking the Swiss over Torreira, he is robbing Arsenal of the energy the Uruguayan would bring in the centre of the pitch. Torreira is similar to Kante in the way he covers so much ground, from left to right, top to bottom – he is irrepressible.

He is a nightmare to play against and Arsenal desperately need more of those sort of figures in their team. Stephan Lichtsteiner is another one of those figures and yet he too has so far failed to win a place in Emery’s starting lineup since signing as a free agent from Juventus in the summer.

Arsenal have been criticised for their soft centre for years. That is a problem that long predates Emery. But in picking Xhaka over Torreira, the new man in the job at the Emirates is only accentuating this issue. Torreira won’t fix all Arsenal’s problems, but he would at least help address one of them.

A lot has been discussed since the start of Arsenal’s first Premier League season under Unai Emery. Mesut Ozil’s bizarre absence, Petr Cech’s anxiety-inducing mispasses and Granit Xhaka’s costly mistakes have all been discussed in-depth. Similarly, Alexandre Lacazette’s marvellous partnership with close pal Pierre Emerick-Aubameyang and Lucas Torreira’s complementing the side have been deemed the positives of the season thus far. END_OF_DOCUMENT_TOKEN_TO_BE_REPLACED

There is clearly a long way to go before Arsenal’s players get to grips with Unai Emery’s tactical philosophy. They deserved to win the three points at the Millennium but it was another nervy defensive performance from the visitors, who finished 3-2 winners over Cardiff City courtesy of goals from Alexandre Lacazette, Pierre-Emerick Aubameyang, and Shkodran Mustafi.

END_OF_DOCUMENT_TOKEN_TO_BE_REPLACED

Hector Bellerin has received as much flak as any Arsenal player since the start of the Premier League season and, to an extent, deservedly so.

In the opening losses against Manchester City and Chelsea, he often looked a headless chicken. Chelsea’s Marcos Alonso had a Team of the Week performance against him, scoring the Blues’ winner in the 3-2 thriller from his side of the pitch. Interestingly, the Citizens’ goals in the 2-0 loss in London also came from his flank. END_OF_DOCUMENT_TOKEN_TO_BE_REPLACED

Having already suffered a defeat to reigning champions Manchester City, Arsenal will be looking to improve their form but face yet another difficult challenge when they travel across London to face Chelsea on Saturday. END_OF_DOCUMENT_TOKEN_TO_BE_REPLACED 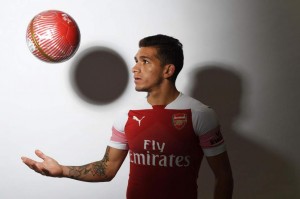 With the Premier League season kicking off not long ago, a number of football fans will either be filled with pure joy and excitement or a lack of hope and enthusiasm. A number of clubs in England have been quite active during the transfer window, with a lot of incomings as well as outgoings as the upcoming campaign is hyped up to be one of the best seasons ever in English football.

Arsenal were one of the many teams who had an impressive, a club who are gearing up for a new era and a fresh beginning, as they look to cherish the immense moments that former manager Arsene Wenger had produced during his 22 years at Emirates Stadium. Now, they will without a doubt be looking ahead to what the future brings to them under the new coach in Unai Emery.

The Gunners brought in the likes of – Bernd Leno, Lucas Torreira, Matteo Guendouzi, Sokratis Papastathopulos and Stephan Lichsteiner. Although these individuals may not be the best players within their respective position, on the other hand, they are the names that Arsenal badly needed in the squad as a whole, whether they will play their role as a regular starter or as a pure squad player.

It’s time to turn the focus on to Torreira, who became a popular figure last year at Serie A side Sampdoria, as he went on to regularly show his intelligence on and off the ball as well his impeccable positional awareness that allows his team-mates to roam further up the pitch. Also, the no-nonsense midfielder and his recent rise earned him a call up to Uruguay’s squad ahead of the 2018 World Cup.

Despite his move to England and his lack of experience at the highest level of football, the 22-year-old is seen as the ideal defensive-midfielder that fits into Unai Emery’s system. On top of that, his range of passing is something that is really underappreciated although it was witnessed from time to time during the World Cup in Russia as his national team went on to reach the Quarter-finals.

Looking ahead to Arsenal’s exciting campaign, the 2018-19 season is there for Torreira to make a huge name for himself whilst aiming to stamp a marker down as one of the best players in Europe within his respective position. Although he may lack the ideal height, it should not be a huge problem as the likes of Manuel Lanzini and N’Golo Kante have shown that size does not matter.

If he is able to prevent the Gunners from conceding a lot of goals on the counter and providesthe perfect protection in front of the backline, then you could expect Emery’s men to have a huge chance of finishing in the top four as well as seriously challenging for the Europa League trophy. This would also allow the club to be seen as one of England’s best teams rather than a laughing stock.

Overall, Lucas Torreira completed his move to Emirates Stadium for a fee of £26million without any second thoughts, which could potentially prove to be one of the Premier League signings of the season. With Emery bringing his style of play to the club and chief scout Sven Mislintat getting the job done off the pitch, Arsenal football club have a lot of things to look forward to in the long run.

With the Premier League now set to return to pitches up and down England and Wales, this long summer is drawing to a close. We did of course have the World Cup in Russia to tide us over, but nothing quite beats the few months of the year where you can turn out and watch your favoured club in action each and every weekend – though some people tend to enjoy more happy afternoons at local grounds than others do of course! With that in mind, it’s time to take a quick look ahead and see just which ground will have the most neutral eyes on it, and there can be few contenders to come anywhere close to Man City travelling to Arsenal on what must be one of the earliest Super Sunday fixtures in living memory!

END_OF_DOCUMENT_TOKEN_TO_BE_REPLACED

Change seems to be the order of the day at north London club Arsenal. Not only are they about to embark on a new Premier League season with a new manager for the first time in over two decades, but there could soon be a change in the club’s ownership as well. Majority shareholder Stan Kroenke has reportedly had a bid of around £550m – that’s two-and-a-bit Neymars – to purchase shares from Alisher Usmanov. The move would make Kroenke the controlling stakeholder at the club, and as a result existing shareholders would be legally obliged to sell their shares to the American billionnaire. Supporter groups have cried out, calling this a “dreadful day” for the Gunners – but would the move actually benefit the club on the pitch?

END_OF_DOCUMENT_TOKEN_TO_BE_REPLACED

The transfer market rages on and few deals were completed this week: none this summer will be bigger than the blockbuster transfer of Cristiano Ronaldo to Juventus. Jorginho and Maurizio Sarri reunites at Chelsea. Lazio acquired Francesco Acerbi from Sassuolo and sent Felipe Anderson to West Ham, while Atalanta signed Duvan Zapata from Sampdoria. The Blucerchiati also sold Lucas Torreira to Arsenal.

A new chapter in the Milan’s ownership saga: Yonghong Li did not re-pay the latest €32M loan by Elliott, the negotiations for a last-minute sale have collapsed and the hedge fund has officially taken over and is assembling the new management. END_OF_DOCUMENT_TOKEN_TO_BE_REPLACED

Sampdoria and Arsenal have reached agreement for the transfer of the 22-year-old midfielder Lucas Torreira. The Gunners will pay slightly more than the €25M release clause, the reported fee is €30M, but in this way they will be able to dilute the payment in multiple installments. Long coveted in particular by Napoli, he has signed a five-year contract. It is a record sale for the Blucerchiati.

The playmaker leaves Serie A after 74 appearances in two years. He was brought in Italy by Pescara from Montevideo Wanderers in February of 2013. After a year and a half in the U-19 team, he debuted in Serie B in May of 2015. The Blucerchiati were quick to act and acquired him that summer for cheap, even though he had featured in just five games. He remained on loan at the Delfino the following season, where he asserted himself as one of the top young prospects in that role and scored five times.

He permanently joined Sampdoria in the summer of 2016 and immediately became a mainstay under Marco Giampaolo. Extremely durable, he barely missed any matches in the last two seasons. He showed off his shooting skills in 2017/2018, where he racked up four scores, including some belters.

He was a no.10 earlier in his career, an aspect that gives him above average technique, then he was moved back and developed into a superb deep-lying playmaker. Despite his size, his contribution is massive in both phases and on his day, he is everywhere. A skilled passer with high IQ, he ranked second in recovered balls last year, behind only Milan Skriniar, 13th in ground covered, 3rd in fouls suffered.

Do you have what it takes to challenge the best Fantasy managers? If you’re up for it play www.fantasy-worldcup.now!