From coaching under immense financial hardship at Crete and leading Pisa to Serie B promotion to taking up one of football’s most difficult bench jobs at former club Milan and missing out on a UEFA Champions League spot by one point, Gennaro Gattuso has experienced more than the average boss at just 42. His coaching career to date has been a roller-coaster, the kind where you have everyone sending mixed signals on how frightening it can be and how you contemplate stepping out of line to sit it out. But for the fierce Calabrese general, he has never been the one to turn back and run away from his battles. Instead, he has always stared his fears square in the eyes, no matter the circumstances.

When Napoli president Aurelio De Laurentiis came calling for the Italian to replace Carlo Ancelotti last December, a man he holds in high regard, another new challenge awaited him at the Casa Volturno training ground. Aware of what he was stepping into upon putting pen to paper and accepting the job of bringing balance at the San Paolo, Gattuso knew if he was to succeed in this new role, his group were going to have to fight, sacrifice and spit blood to revitalize the Partenopei.

Initially, Gattuso seemed in over his head, failing to disguise his flaws and those of the current squad this season, losing 4 of 5 in the league and falling into the bottom half of the table. However, he has completely reversed this downward spiral, winning 7 of 10 in all competitions, including wins over Juventus, Lazio and Inter – the latter two which have them one result away from clinching a Coppa Italia berth.

Throughout this stretch, Gattuso has been able to elevate those who were otherwise fumbling and struggling for form under Ancelotti, including Spanish international Fabian Ruiz.

The 23-year old broke out in a big way in his first season at the club, eventually earning regular runs in the starting XI after moving from strength to strength and having a tremendous impact. Yet, too often he was used in areas under Ancelotti where his best talents failed to shine through. Recently though, he has found the magic wand of a left foot he wields and the vision to split lines which has put him back on track as one of Italy’s brightest midfield players, something which will certainly sound the alarms for clubs like Real Madrid and Barcelona who have been linked extensively with a summer move for the ex-Real Betis man.

Newcomer Diego Demme, who has seemingly taken Allan’s starting spot after the Brazilian came under criticism of Gattuso after his training approach failed to meet expectations, is also providing the kind of balance in the midfield that frees up Ruiz and Piotr Zielinski to have a real say in attacking areas.

But Gattuso’s impact has sparked more than just a few, with his presence having a trickle down effect on the entire squad who are not only putting in solid collective efforts, but also buying into the way their new boss wishes to perform with the ‘grinta’ for which he personified throughout his own career. Now that he has his squad fighting and willing to get their hands dirty, Gattuso has shown improvement in the tactical aspects of his job, just as we saw in the 1-1 draw with Barcelona.

His 4-1-4-1 operated by design, allowing Napoli to play with numbers behind the ball as Barcelona expectedly held the upper-hand in possession and strike the Catalans on the rare counter-attack just as Dries Mertens did. Many will argue Napoli hunkered down and absorbed too much, and preferred to have been the aggressor as Barcelona’s been susceptible to getting split open on many occasions this season. Nonetheless, it was a solid tactical display from a manager whose main critics have always lamented his limitations and it is a result that suggests he can do more than motivate.

Gattuso has never been one for excuses. He has always honestly addressed the media and never deflects blame onto his players. There is accountability, ownership of any wayward results and off-kilter performances. He demands professionalism, and equal commitment to the cause. As a result of this, he has won over the Napoli fans and is beginning to get the best out of an underachieving squad who are now working to correct the wrongs of the earlier season to get back where they need to be amongst the Serie A elites.

Is he tactically limited? Perhaps. Does he have the CV of a top coach or one that proves he can hold down a job? No. Does his football style look pedestrian at times? Certainly. But is he evolving as a manager in this game? We think so.

Liverpool and Napoli played to a scrappy 1-1 draw at Anfield Wednesday evening. Dries Mertens opened the scoring with a lovely bit of finishing towards Alisson’s far post, while Dejan Lovren’s header led the attacking assault in the second half, but it was not enough for Jurgen Klopp’s men to pick up all three points.

Here are the Partenopei player ratings on the night. END_OF_DOCUMENT_TOKEN_TO_BE_REPLACED

Serie A’s marquee matchup of round 2 lived up, then exceeded, all hype and expectations as Juventus and Napoli played to a theatric 4-3 result, with the Bianconeri managing to come out on top after squandering a three-goal lead in the second half.

Here are the player ratings for Carlo Ancelotti’s Partenopei on the night in Turin. END_OF_DOCUMENT_TOKEN_TO_BE_REPLACED

Here are five key elements which could determine the outcome of this round 2 encounter. END_OF_DOCUMENT_TOKEN_TO_BE_REPLACED

The players returned from summer holiday with their families, have been training regularly and are now ready to hit the pitch once again for their respective clubs as the 2019/20 Serie A season commences this weekend in Italy.

For Round 1 of action, our attention turns to one of the opening weekend’s main events on the peninsula as Fiorentina play host to Napoli at the Stadio Artemio Franchi in Firenze.

Here is everything you need to know ahead of the clash. END_OF_DOCUMENT_TOKEN_TO_BE_REPLACED

From the midfield position, plenty of individuals turned up to elevate their respective sides in the 2018/19 Serie A season, thus making this area arguably the hardest to rank.

After careful thought and a hard look at the impact each qualifier had on their club’s midfield, here is the shortened list of the best five from this past season. END_OF_DOCUMENT_TOKEN_TO_BE_REPLACED 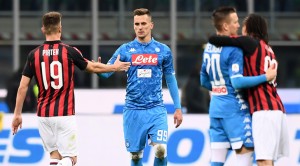 Familiar faces met yet again last night at the San Siro as Gennaro Gattuso and his mentor Carlo Ancelotti squared off in a clash between Milan and Napoli.

The first half of action saw the Rossoneri assert themselves and threaten to go ahead, while the visitors swung momentum in their favor after the break only to see several attempts go awry.

In the end, the two played to a 0-0 draw. Here are four takeaways from the Partenopei’s stalemate in Milano: END_OF_DOCUMENT_TOKEN_TO_BE_REPLACED

As we wave goodbye to 2018, and say hello to 2019, it is now time to list the 10 best performing transfers from the summer market – based on the impact each has provided to their respective clubs during the first half of the 2018-19 Serie A season. END_OF_DOCUMENT_TOKEN_TO_BE_REPLACED

Champions League Group C is a tight one between leaders Napoli, Paris Saint-Germain and last year’s runner-up Liverpool entering the final round of play. As things stand, the Partenopei lead PSG by a single point, while holding a three point cushion over the English giants who they will pay a visit tonight at Anfield.

Carlo Ancelotti’s Napoli can qualify for the Round of 16 through one of the following scenarios: 1) win or draw vs Liverpool, 2) lose by a goal, but score at least once (2-1, 3-2) and PSG wins/loses. END_OF_DOCUMENT_TOKEN_TO_BE_REPLACED

Napoli turned around their UEFA Champions League Group C bout with Paris Saint-Germain on Tuesday, earning a 1-1 draw with strong second half efforts from Kalidou Koulibaly and Allan, as well as a cold-blooded penalty strike from Lorenzo Insigne.

As things stand, the Partenopei sit joint-first with Liverpool, and cling to a slight advantage on goal differential over the English outfits. Much of this success can be attributed to the individual efforts of many in the squad under manager Carlo Ancelotti. But, without question, the sharpness in play and positive results stem from the Italian’s meticulous approach towards tactical modifications and rotation. END_OF_DOCUMENT_TOKEN_TO_BE_REPLACED