The players returned from summer holiday with their families, have been training regularly and are now ready to hit the pitch once again for their respective clubs as the 2019/20 Serie A season commences this weekend in Italy.

For Round 1 of action, our attention turns to one of the opening weekend’s main events on the peninsula as Fiorentina play host to Napoli at the Stadio Artemio Franchi in Firenze.

Here is everything you need to know ahead of the clash. END_OF_DOCUMENT_TOKEN_TO_BE_REPLACED

Kevin-Prince Boateng to Barcelona is a transfer that has come as a bolt out of the blue.

There wasn’t even a hint of a move from the Catalans for a player who is adored and despised in equal measure, depending on which team you support.

One thing is clear though. He’s a fearsome competitor who will add his huge presence in the dressing room to liven things up a bit. END_OF_DOCUMENT_TOKEN_TO_BE_REPLACED

As we wave goodbye to 2018, and say hello to 2019, it is now time to list the 10 best performing transfers from the summer market – based on the impact each has provided to their respective clubs during the first half of the 2018-19 Serie A season. END_OF_DOCUMENT_TOKEN_TO_BE_REPLACED

Our game of the week looks at the blockbuster fixture at Estadi Ciutat de València that saw Levante put an end to Barcelona’s unbeaten streak in an enthralling 5-4 win that will be etched on the minds of both players and fans alike for some time to come.

A much changed Barcelona side came into the tie with a lethargy that suggested they believed this result to be a mere formality.

However, they were given an early shock when Boateng just managed to force a whipped cross into the goal off the underside of the bar to open proceedings in the ninth minute.

Following an exhilarating penultimate round of fixtures in which Barca waved goodbye to the prospect of an unbeaten season, we look at the team of the week to arrive from the fallout of the action.

The Slovakian goalkeeper has been exceptional between the sticks for Atleti this season, earning plaudits from across the footballing world.

With his side seemingly set to finish in a more than respectable second position, his 22 clean sheets with just 20 goals conceded is a truly excellent record.

Referees do not really get the recognition that their career deserves. This season has signalled the end to yet another Premier League referee, with Chris Foy ending his professional career at the Etihad Stadium on the final game of the campaign in what was a comparatively straightforward game to officiate.

Despite being the tender age of 52 years old, Foy is moving to the Professional Game Match Officials Board, where he will take on a coaching role underneath fellow referring alumni Howard Webb, PGMOL’s technical director. Foy was a widely regarded officiating talent and his loss will be felt in the Premier League. But the benefit of him coaching the next generation is of far greater significance.

Foy, like many other referees, is an unsung hero. Putting up with the criticism of players is commendable, but being able to hold your head high with an angry crowd of 60,000 people screaming at you is something else. Referees are strong folk, and Foy has proven his mettle these past 21 years.

Foy is a poker player of a referee, using a similar calculus to that of Phil Hellmuth, a 13x WSOP bracelet holder. 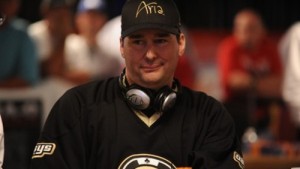 At first it seems illogical to even try and compare a referee with a poker star but on closer examination the similarities of both become clear.

Both men have tremendous endurance levels. Foy has to be able to keep up with the high-octane action for upwards of 120 minutes. Meanwhile, Hellmuth may be sat at the table for six or more hours. To do either requires great levels of mental and physical strength. The mental toughness of both men is hugely commendable, Foy handles his critics even better than Gareth Bale.

Moreover, especially in recent years, Foy has taken on more of an elder statesman approach to the game, much like Hellmuth, who is two years younger than the Brit. Both now use their years of experience to read players. More often than not, both men’s second guessing usually pays dividends. When Foy reads a player correctly, he is trying to ensure that he stays on the pitch and does not cause any harm to anyone. With Hellmuth, it is to stop them from hurting his purse. Liverpool boss Brendan Rodgers should have a word with Foy, the ref would have had Raheem Sterling signed up ages ago.

Again like the poker player, knowing when a player is bluffing, so to speak, is one of Foy’s bigger strengths. He always seemed to have an eagle eye for simulation. Hellmuth would not have won 13 WSOP bracelets had he not been skilled in the art of deception, both in thwarting it and performing it himself.

Refs and card players need to pick their battles wisely. If a ref goes in too soft with a player, it may have dire consequences. The same can be said if he is too soft. Throughout his career, Foy has made a reputation for staying level-headed on the pitch. He is very much about a crime to fit the punishment. He does not storm in, throwing his cards around, as seen by his record of 2.77 cards per game and 0.17 red cards per match.

The same idea fits Hellmuth. He cannot afford to go hounding that young kid at the bottom of the table and nor can he afford to go too soft on that same player which would allow the young pup to accrue a nice pile of chips. Both roles require you to be wise in warfare.

Although a trivial point, Foy doesn’t referee Premier League matches, he has been a respected European ref and has helped out at the International level, his adaptability is like Hellmuth, who can play various poker formats.

A 21-year-old Foy started officiating back in 1983. By 1994 he had been promoted to the Football League’s list of assistant referees. He was a Premier League assistant the year after.

His first taste of actual refereeing in the professional game came in 1996. After establishing himself as a respected referee in the Football League, Foy was rewarded with a promotion to the Premier League in 2001, taking charge of an uninspiring 0-0 draw between Bolton Wanderers and Charlton Athletic. Foy has never looked back.

Upon becoming Premier League accredited, which is a huge achievement in itself, Foy has also had his fair share of Wembley football, which means just as much to a professional referee as it does for a footballer.

While his first trip to Wembley was hardly the most glamourous of fixtures – Stevenage Borough vs. Kidderminster Harriers in the final of the FA Cup Vase – it was still a great achievement and part of the paying your dues process.

In 2009, it was Foy who was trusted to rule over the League Cup final between Manchester United and Tottenham. Foy’s fitness levels really shone through as he was able to keep order for all 120 minutes.

But it was the year after where Foy picked up his highest honour in the FA Cup final. Although the match between Chelsea and Portsmouth was hardly a classic, there was a lot for the referee to do. It was a game that saw him award a penalty but fail to spot Kevin-Prince Boateng’s dangerous, World-Cup ruining challenge on Michael Ballack.

Much like with Howard Webb last season, Foy will be missed by fans of the Premier League. He was a recognisable face and one whom you could converse about. However, hopefully he will turn out to be an even better coach in prepping the next generation for the big time.