It has been a great start to the Premier League season for Chelsea in terms of results. They beat Huddersfield comfortably in the first match of the season, 3-0, before winning a thrilling contest against Arsenal 3-2 last weekend at Stamford Bridge.

If there is one thing that we have learned from the first two games, it’s that Chelsea are really trying to play Maurizio Sarri’s style of football. The players all seem to have bought in to the manager’s philosophy.

Unfortunately, to get going properly under Sarri, it takes time. This is something he was not afforded as he was not even in charge of the squad from the first day of preseason training. We are starting to see now what the delay has cost the Blues and their Italian manager. END_OF_DOCUMENT_TOKEN_TO_BE_REPLACED

Two teams with new managers, albeit coming from very different situations. Chelsea hired Maurizio Sarri as the latest member of their managerial merry-go-round. Arsenal, on the other hand, Unai Emery takes charge after the Gunners are coming off a very long tenure under Arsene Wenger.

Arsenal started their Premier League campaign against defending champions Manchester City, and it did not go well. The Gunners had positive spells in the match, but they were overpowered by a City side that are a well-oiled machine at this point.  END_OF_DOCUMENT_TOKEN_TO_BE_REPLACED

Chelsea began their 2018/19 Premier League campaign with a victory over Huddersfield on Saturday. Goals from N’Golo Kanté, Jorginho and Pedro saw the Blues win 3-0. It was Maurizio Sarri’s first match in charge, but at the beginning it was hardly “Sarriball.”

Chelsea were able to go into Huddersfield and get a comfortable result, which is all that matters on the first match day. They were missing key players like Eden Hazard and Mateo Kovačić from the starting eleven. In addition to this, the squad has only been working under Sarri for less than a month, so an adjustment period will be needed. END_OF_DOCUMENT_TOKEN_TO_BE_REPLACED

It is early August in Turin, and Juventus have enjoyed a successful transfer campaign. Perhaps, the most successful in their history as they landed Cristiano Ronaldo, arguably the best player in the world. At the very least, he is considered top two.

The Serie A season is right around the corner, but Juventus are not concerned with that. They know that they would have been the favorites to win Serie A for the eighth consecutive year with or without Ronaldo. That was not the purpose of the move.  END_OF_DOCUMENT_TOKEN_TO_BE_REPLACED

The big transfer story out of Serie A for the past week or so has been the potential return of Leonardo Bonucci to Juventus. Just one year ago, Bonucci shook Serie A by leaving the Bianconeri in order to join rivals AC Milan, and now he seems to want to reverse that decision.

The deal, as has been reported, will see young Italian defender Mattia Caldara and Gonzalo Higuain join the Rossoneri in exchange for Bonucci. Caldara is an interesting inclusion into the deal because the youngster was just brought back to Juventus after two season on loan to Atalanta.  END_OF_DOCUMENT_TOKEN_TO_BE_REPLACED

Last night at 8:00pm Pacific Time, Manchester United faced off against AC Milan in their first match of the International Champions Cup. One thing was painfully noticeable for United: they are in desperate need of a center back.

The pairing of Eric Bailly and Chris Smalling were not up to the task, as the Milan attack caused them problems all evening long. Yes, it was just a preseason friendly and there is still time before the Premier League begins on August 10th; however, the defense is a major question mark for the club and last night provided no reassurances. Jamie Vardy and Leicester City will be knocking on their door at Old Trafford before you know it.  END_OF_DOCUMENT_TOKEN_TO_BE_REPLACED 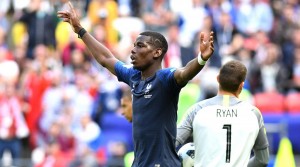 It might be crazy to wonder whether someone who cost Manchester United 89 million pounds is headed for a breakout year, but that’s precisely where we are with Paul Pogba.

The French international has had a very commanding, consistent display at the 2018 World Cup in Russia, and one can’t help but wonder why the consistency is showing for France when it alluded him all season at United.To begin to answer the question, we must look at his season and experience in Manchester.  END_OF_DOCUMENT_TOKEN_TO_BE_REPLACED

The latest news report out of Italy are stating that Maurizio Sarri will indeed finally takeover the Chelsea bench. The rumors have been circulating for a while, so until Sarri actually puts pen to the paper, nothing is definite. We can, however, begin to look at the current Chelsea squad to decipher which players would fit Sarri’s system.

The news is reporting that not only will Sarri join Chelsea, but so will Jorginho. In a separate article for eurofantasyleague.com, we looked at why Jorginho would be a key signing for Chelsea if they were going forward with Sarri.  END_OF_DOCUMENT_TOKEN_TO_BE_REPLACED

There have been many, many rumors over the past couple of weeks. Cristiano Ronaldo seems headed for Juventus. Ronaldo leaving Real Madrid seems to be a saga we’ve been following every summer for the past few seasons, so we should take these rumors with a grain of salt.

Yet, this time it seems sort of real. In the past, rumors would surface that Ronaldo was upset with Real and had decided to leave,but would always stay. So what’s the difference this time? Well, for starters, in the past there weren’t actual negotiations or numbers being discussed.

Manchester United had always been the rumored favorite to land him because of their history, but there was never any concrete talk of negotiations or a price tag.  END_OF_DOCUMENT_TOKEN_TO_BE_REPLACED

Maurizio Sarri to Chelsea has been spoken about so much that it seems like a done deal. Only, it isn’t.

As of now, the facts remain the same: Antonio Conte is the manager of Chelsea and Maurizio Sarri is still employed by Napoli. This remains a problem for all four parties involved. Why? Well Conte is the manager of a club who doesn’t want him. Sarri is employed by a club who has no use for him. Chelsea can’t get their transfer campaign started until this is resolved, and Napoli are paying two coaches to do one job.

At the end of the day, the bigger problem lies with Chelsea and Maurizio Sarri; however, as Conte has a huge buyout clause in his contract and will be paid very well to walk away. Napoli also have their coach in place and have begun signing new players, therefore, they are not affected by Sarri still being on the books.  END_OF_DOCUMENT_TOKEN_TO_BE_REPLACED