Brescia-Milan: the Rondinelle will not have Mario Balotelli for a couple of matches, but Ernesto Torregrossa has actually carried the load scoring-wise recently and he and Alfredo Donnarumma formed a formidable partnership last season in Serie B, so they might be able to survive the blow. They have added two intriguing pieces in January in Birkir Bjarnason, who was very dangerous for a midfielder in his time in Pescara, and Simon Skrabb: they should both have their chances because Nikolas Spalek at no.10 has been pretty inconsistent. Sandro Tonali is coming off a two-assist performance and also Stefano Sabelli and Romulo have been decently proficient in a supporting role. END_OF_DOCUMENT_TOKEN_TO_BE_REPLACED

Cagliari-Milan: the Rossoblù played their worst game of the season against Juventus and will be eager to bounce back here and snap out of a three-game losing streak. Their last two goals were scored by Joao Pedro and Giovanni Simeone and obviously the Brazilian forward, who has tallied 11 in the season, remains their most appealing player, while the ex-Fiorentina man is more inconsistent, but has his moments in the sun. Radja Nainggolan has not been done a lot in the past four games and that has caused a decline in their offensive efficiency. They lack reliable fantasy option behind those because Nahitan Nandez and Marko Rog are not involved in the offense on a regular basis and their yield there is spotty. Their fullbacks, Luca Pellegrini in particular, have picked up few assists. END_OF_DOCUMENT_TOKEN_TO_BE_REPLACED

Atalanta: Josip Ilicic lost the appeal so he will serve the second game of his suspension. Ruslan Malinovskyi is disqualified as well. Duvan Zapata is not ready after missing time with a thigh strain despite the early optimism, while Luis Muriel and Remo Freuler, who picked up some muscular ailments with their national teams, should be fine.

Bologna: Mattia Bani and Danilo are banned. Takehiro Tomiyasu is poised to come back from a thigh strain, while Federico Santander suffered the same injury few days ago and will miss three weeks. Roberto Soriano and Mitchell Dijks will miss another one due to a knee and toe edema respectively, also Mattia Destro remains on the shelf due to knee soreness. END_OF_DOCUMENT_TOKEN_TO_BE_REPLACED

Atalanta-Juventus: after producing at an historic pace through the first ten weeks, the Goddess failed to score in their last two matches against Sampdoria and Cagliari. Josip Ilicic and Ruslan Malinovskyi are suspended, but the Slovenian attacker has appealed, but they will get a boost from the return of Duvan Zapata, who is expected to feature at least in limited capacity. He notched six goals in seven appearances before getting hurt. Luis Muriel is no longer red-hot, as he has not found the target in the last three rounds, but he will be again their main scoring option from the jump. Alejandro Gomez is going through something similar, but he always has loads of potential as an assist-man. Mario Pasalic is likely to move to the hole and he can pretty sneaky there. Robin Gosens has been their best wing-back so far, but also Timothy Castagne has hit the net once. END_OF_DOCUMENT_TOKEN_TO_BE_REPLACED

Cagliari fumbled away a glorious fantasy haul by giving away not one but two late cheap goals against Fiorentina. Therefore, the team that earned the best result in this round was Torino, which crushed Brescia on the road in the first game with Eugenio Corini at the helm. The Granata had not won in six rounds coming into the contest, but had fared decently in last week’s Derby with Juventus.

Walter Mazzarri picked Bremer over the other options in the back, selected Ola Aina as right wing-back, fielded both Sasa Lukic and Soualiho Meite with Daniele Baselli out of commission and trotted out Simone Verdi next to Andrea Belotti, as Simone Zaza and Iago Falque are both on the mend. END_OF_DOCUMENT_TOKEN_TO_BE_REPLACED

Brescia-Inter: Eugenio Corini has had some reservations in using Alfredo Donnarumma and Mario Balotelli together, but Florian Aye, while tactically precious, has not been productive and so the more predictable duo should be the way to go moving forward. However, they have combined for just one goal in the last three matches and they will face one of the best back-lines in the League. Daniele Dessena’s injury ended up hurting Romulo’s fantasy stocks in the short-term, since he is being used as box-to-box, at least until one between Emanuele Ndoj and Jaromir Zmhral manages to unseat Nikolas Spalek, who has not been effective as no.10. Sandro Tonali is coming off his first Serie A goal and constitutes is half of their offense. END_OF_DOCUMENT_TOKEN_TO_BE_REPLACED

Little time left in the window and the clubs are putting the finishing touches on the rosters and getting rid of surplus players. The biggest move of the week was once again made by Inter, which signed Alexis Sanchez on loan from Manchester United and also acquired Cristiano Biraghi from Fiorentina in a swap with Dalbert. The Red Devils sent also Chris Smalling to Roma, who temporarily leaves Old Trafford after eight seasons and was regular in the last three. His experience will give him an edge over the younger options, but it would not particularly surprising to see Federico Fazio lose the starting job at some point. END_OF_DOCUMENT_TOKEN_TO_BE_REPLACED 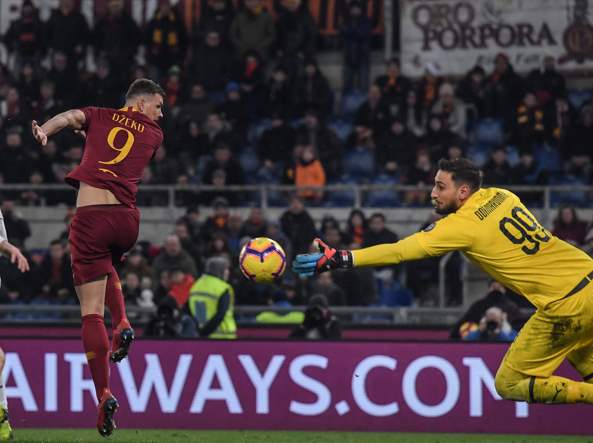 There were a couple of compelling and down-to-the-wire matches in this round, but the most anticipated one did not disappoint, even though it was not the highest scoring one, so Roma-Milan gets the shout-out.

Roma were coming off four hellish days, as they wasted a three-nothing lead against Atalanta in Serie A play and more importantly were smoked by Fiorentina in Coppa Italia. The vultures have started gathering over Eusebio Di Francesco’s head, even though the recent results were actually fine, but obviously a 1-7 loss in a big black eye. Quite the opposite for Milan, who immediately reaped the benefits on their investment on Krzysztof Piatek, who carried them past Napoli in the domestic cup, and had tied with the Azzurri in the previous round. END_OF_DOCUMENT_TOKEN_TO_BE_REPLACED

Milan-Juventus was the most anticipated match coming into the round and it did not disappoint, even though the score ended up being a little lopsided. As if there were not enough storylines already, one arose even before the start as Massimiliano Allegri elected to keep Leonardo Bonucci on the bench, sparing him a date with a very hostile environment. His replacement Medhi Benatia had a mixed performance.

The Bianconeri came into the game trying to maintain their lead over Napoli, which were victorious on Saturday, and looking to bounce back after a disappointing loss against Manchester United in Champions League. Milan had prevailed in five of their last Serie A fixtures, twice thanks to Alessio Romagnoli in the final minutes. END_OF_DOCUMENT_TOKEN_TO_BE_REPLACED

The Argentinian coach tinkered with his system, using Ignacio Pussetto as trequartista, giving Hidde Ter Avest his first start on the flank and deploying Rodrigo De Paul in the midfield over a more defensive option. END_OF_DOCUMENT_TOKEN_TO_BE_REPLACED