The Sharks came into the game looking to atone for last week’s tough loss to a direct rival, Chievo Verona. On the other hand, the Biancocelesti had not lost since late February and were coming off a draw with Atalanta.  END_OF_DOCUMENT_TOKEN_TO_BE_REPLACED

END_OF_DOCUMENT_TOKEN_TO_BE_REPLACED

Once again some key players risk missing the next Serie A round due to injuries. Here are the latest news: you can find the updates compared to the original version in italic.

Napoli:  Marek Hamsik was under the weather late in the week, but he will try to shake it off by Saturday night. Elseid Hysaj was subbed off on Monday, but it was only precautionary. Vlad Chiriches is out with a hamstring strain, Faouzi Ghoulam with a fractured fibula. Arek Milik should make the squad list this time.

END_OF_DOCUMENT_TOKEN_TO_BE_REPLACED

Once again, the game with the most drama in Serie A was a battle for survival in the lowest part of the standings: Crotone-Spal was not only the highest scoring game in the last weekend, but it also had an extremely impactful result.

The Sharks approached the game hoping to redeem themselves after a tough loss against another rival, Benevento, but on the road. They had fared decently at home in the last month or so, sharing the spoils Cagliari and Atalanta and defeating Chievo. On the other hand, the Estensi were looking to resume winning after eight negative results and three straight losses, which had put Leonardo Semplici on the hot seat.

END_OF_DOCUMENT_TOKEN_TO_BE_REPLACED

In a Serie A round that included some anticipated match-ups such as the Derby della Mole between Torino and Juventus, the bout for the sixth place between Sampdoria and Milan and an intriguing tilt between Atalanta and Fiorentina, the most hard-fought and high scoring game ended up being the battle for survival featuring Benevento and Crotone.

The Sanniti had won two games at home before running into Napoli, while Crotone were coming off four positive results: the commanding win against Verona and the three straight draws with Cagliari, Inter and Atalanta. END_OF_DOCUMENT_TOKEN_TO_BE_REPLACED

There were a few unexpected contributors in the last Serie A round: here are the top fantasy players of the week.

END_OF_DOCUMENT_TOKEN_TO_BE_REPLACED

There was a surprising team of the week in the last Serie A round: Crotone were the only one to score multiple goals and keep a clean sheet. END_OF_DOCUMENT_TOKEN_TO_BE_REPLACED 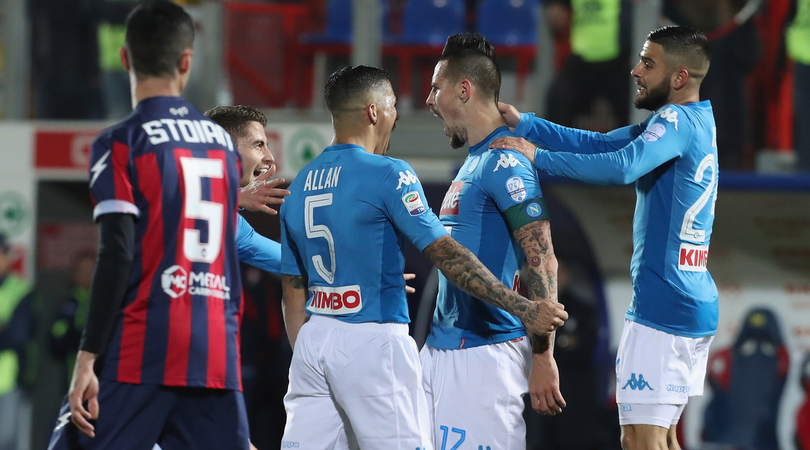 There were not many contenders for Serie A club of the week: Sampdoria met the criteria but they came through extremely later after blah performance in a cozy match-up. So the award goes to the Winter champions, Napoli, and it is a much-deserved recognition for all the work they have done in the first half of the season.

END_OF_DOCUMENT_TOKEN_TO_BE_REPLACED

Some shocking results in the last Serie A round: let’s take a look at the best performances by the single players.

END_OF_DOCUMENT_TOKEN_TO_BE_REPLACED

Here are Serie A’s Fantasy Picks in every position for Week 13. The suggested formation is 3-4-3. END_OF_DOCUMENT_TOKEN_TO_BE_REPLACED