Atalanta: Matteo Pessina returned in Champions League from a late-season patellar dislocation. Ruslan Malinovskyi had an old scar in his adductor flare up and missed the previous game, but he is set to be available Saturday. Cristiano Piccini (knee) could return sooner rather than later, while Pierluigi Gollini (knee) is at least two weeks away.

Benevento: Nicolas Viola has resumed practicing after his meniscus surgery and made the squad list. Gabriele Moncini and Federico Barba are out again to muscular problems and are joined in that regard by Iago Falque.  END_OF_DOCUMENT_TOKEN_TO_BE_REPLACED

Benevento: Andres Tello is be back after missing some time with ailments, but Federico Barba is still out. Gabriel Moncini will skip a game or two due to an adductor strain. Nicolas Viola needs more time to recover from a meniscus tear. END_OF_DOCUMENT_TOKEN_TO_BE_REPLACED

Atalanta: Pierluigi Gollini (PCL tear), Aleksey Miranchuk (thigh strain) and Matteo Pessina (patellar dislocation) will once again be unavailable and the coach raised some concern regarding Cristiano Piccini, who has not been able to practice fully since joining. The fact that they are signing another player in his role does not bode well for his timetable. The team announced that somebody tested positive but did not disclose whom: Mattia Caldara and Rafael Toloi are absent out of the blue.

Benevento: Federico Barba returned midweek but subbed off in the first half and has been ruled out. Andres Tello (thigh) and Oliver Kragl (neck) are again sidelined. Nicolas Viola (meniscus) might not be back for the first game after the break. END_OF_DOCUMENT_TOKEN_TO_BE_REPLACED

Inter: Matias Vecino has been ruled out due to a thigh contracture.  END_OF_DOCUMENT_TOKEN_TO_BE_REPLACED

Juventus: Blaise Matuidi subbed off against Ajax due to a calf problem, but the injury is not believed to be severe. Emre Can (ankle) and Giorgio Chiellini (calf) will sit Saturday’s game too but they are not distant from returning. Juan Cuadrado is back after knee surgery, while Douglas Costa suffered a new calf problem. Miralem Pjanic, Mario Mandzukic and Cristiano Ronaldo have not been called up for rest purposes.

Napoli: Simone Verdi was scatched late for the previous match due to muscle fatigue, but he was called up for the London trip. Raul Albiol (knee) and Amadou Diawara will miss another one, but at least of them could be back next week.

Inter: Marcelo Brozovic suffered a pull of the semitendinosus muscle in the right pull and will miss the Frosinone game and perhaps one more after that. Lautaro Martinez and Stefan De Vrij are set to be called up after being sidelined by thigh ailments. END_OF_DOCUMENT_TOKEN_TO_BE_REPLACED

Napoli: Mario Rui will be back in the squad list after missing time with a thigh sprain and Amin Younes could be called up as well after nursing his surgically repaired Achilles tendon away from the team for a while. Arkadiusz Milik was a little fatigued this week, but he should be fine. END_OF_DOCUMENT_TOKEN_TO_BE_REPLACED

Inter: Mauro Icardi took some tests this week, which revealed no structural damage on his achy knee, but he is still poised to be unavailable this week amid the standoff with the managament. Balde Keita is having a hard time shaking off a thigh strain. END_OF_DOCUMENT_TOKEN_TO_BE_REPLACED 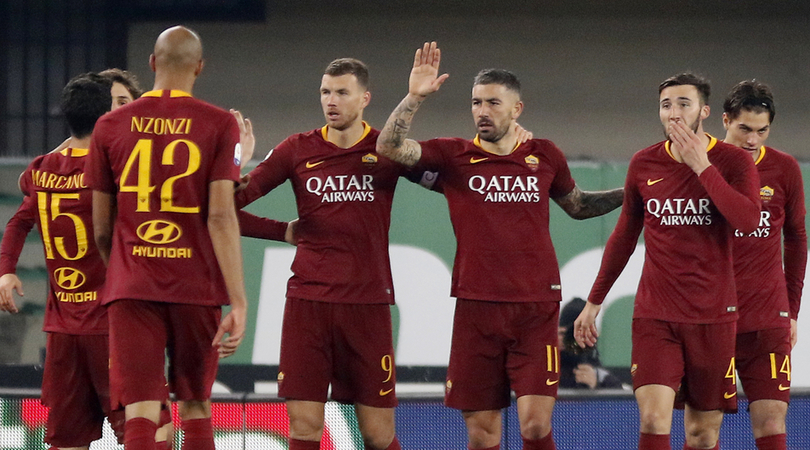 They were coming off two draws in Serie A, against Atalanta and Milan. Eusebio Di Francesco did not really rotate the squad despite the upcoming Champions League with Porto and only rested Daniele De Rossi among the projected starters, who however is not quite ready to play twice in a row after a tough knee injury. END_OF_DOCUMENT_TOKEN_TO_BE_REPLACED

Napoli: Simone Verdi will remain on the mend because of an ankle sprain, while Adam Ounas missed the last game with a minor muscular ailment. Alex Meret should be ready to start. END_OF_DOCUMENT_TOKEN_TO_BE_REPLACED

Juventus: Federico Bernardeschi and Sami Khedira will not play this week because of an adductor issue and an ankle sprain. Miralem Pjanic should be available after a little muscular ailment with Bosnia. Emre Can is recovering from thyroid surgery. The two German players could return within a couple of weeks, the Italian winger sooner.

Napoli: Simone Verdi worked his way back from a thigh problem, but rolled his ankle in practice and could miss some time. Amin Younes has shaken off the Achilles injury, but he had the same problem of his teammate, even though his one is considered milder. Alex Meret is dealing with a sore shoulder on top of going through a bumpy rehab from a forearm fracture. Dries Mertens got a bruise in practice. END_OF_DOCUMENT_TOKEN_TO_BE_REPLACED